As we enter the early 1990’s, we can skip over talking about things like the mullet, 90210, grunge bands and big bangs. Instead, let’s focus on a variety of snow guard options that began to enter the market right around this time. Seemingly the most active of these markets in the 1990’s was standing seam metal roofing.

In an earlier blog from this past summer, I touched on the topic of the increased use of corrugated or through-fastened metal panels, but in the early ‘90’s, sheet metal roll forming technology allowed “Job Site Manufacturing” (JSM) of standing seam metal panels formed in a wide variety of seam profiles, widths, and project-specific lengths. For obvious reasons, this opened the door to an increased use of standing seam panels. 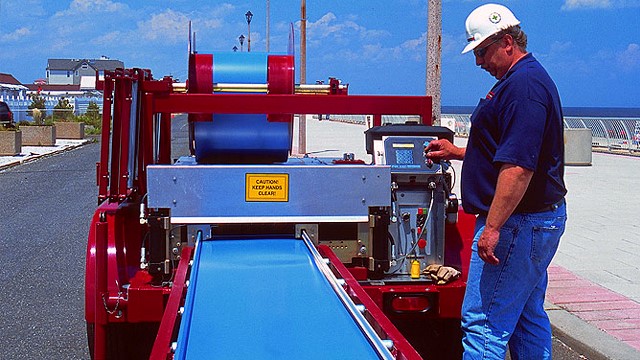 As I’ve discussed in many of my blogs, the issue is that, along with new roofing technology, comes new problems to solve. Of the many benefits to standing seam roof panels, the ability to install the panels with no exposed fasteners is right up there at the top of the list.

This created complications for snow guard installation and begged the question, “how do you install snow guards on standing seam metal roof panels without penetrating the seams?” The answer to this question had originally been addressed back in the late 1800’s using a clip-on device to manage the snow (patent image below). 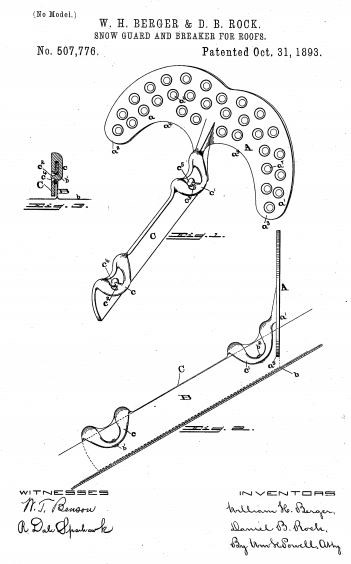 Later on, in the roaring twenties, a new device was patented that used a set screw to attach to the seam (patent image below). 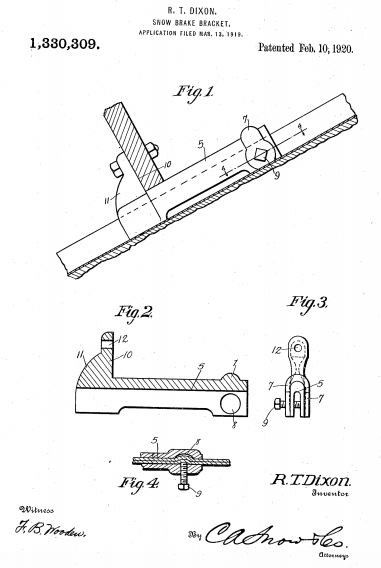 Then in the early 1990’s, several manufacturers copied these earlier designs and (shockingly) were able to obtain patents for them. It was during this period that many snow guard designs began being resurrected, either through being copied, as stated above, or possibly by being pulled off the shelf from a bygone era. Either way, history was repeating itself once again!

A second solution to metal panel installation also evolved in the 1990’s. This solution incorporated the use of “high tech” adhesives. Briefly but directly, adhesive-mounted snow guards are, at best, a temporary solution. They may work for a year or two but the adhesive, under sustained loads (snow and ice that doesn’t melt for long periods of time), stretches and yields. Adhesives may very well have a place in the construction industry – they’re just not ideal for attaching snow guards.

A few of the more notable designs were the Gough design (patent image below), the original Vermont Slate and Copper Services (Alpine SnowGuards) design and the handmade, bent sheet metal pipe-style fin (for lack of a better name), like the below right design from A.C. Hathorne, which we’ve seen on a few roofs around Vermont.

Check back next week as we wrap up with a summary of snow guard evolution!