This article touches on managing snow on composition shingles as observed from our snow guard performance testing facility in Morrisville, Vermont between mid-January – early March, 2020. We also researched and reported managing snow on synthetic slate, corrugated metal, slate and tile, membrane and solar panels, too. All research occurred during Jan. 16, 2020 – Mar. 5, 2020 for a true “apples to apples” comparison.

The pads on the 7/12 pitch performed flawlessly. However, I say this somewhat jokingly because during all of the snowfall events we’ve had this year, most of the snow on the 7/12 NW facing roof slopes have been windblown, resulting in the snow essentially being redeposited onto the SE facing 12/12 slopes on the other side of the building.

This has given us a great opportunity to observe performance of our PP120 pipe-style on a steep-slope, composition shingle roof. We don’t have much to report on the 7/12 pitch side as of yet. 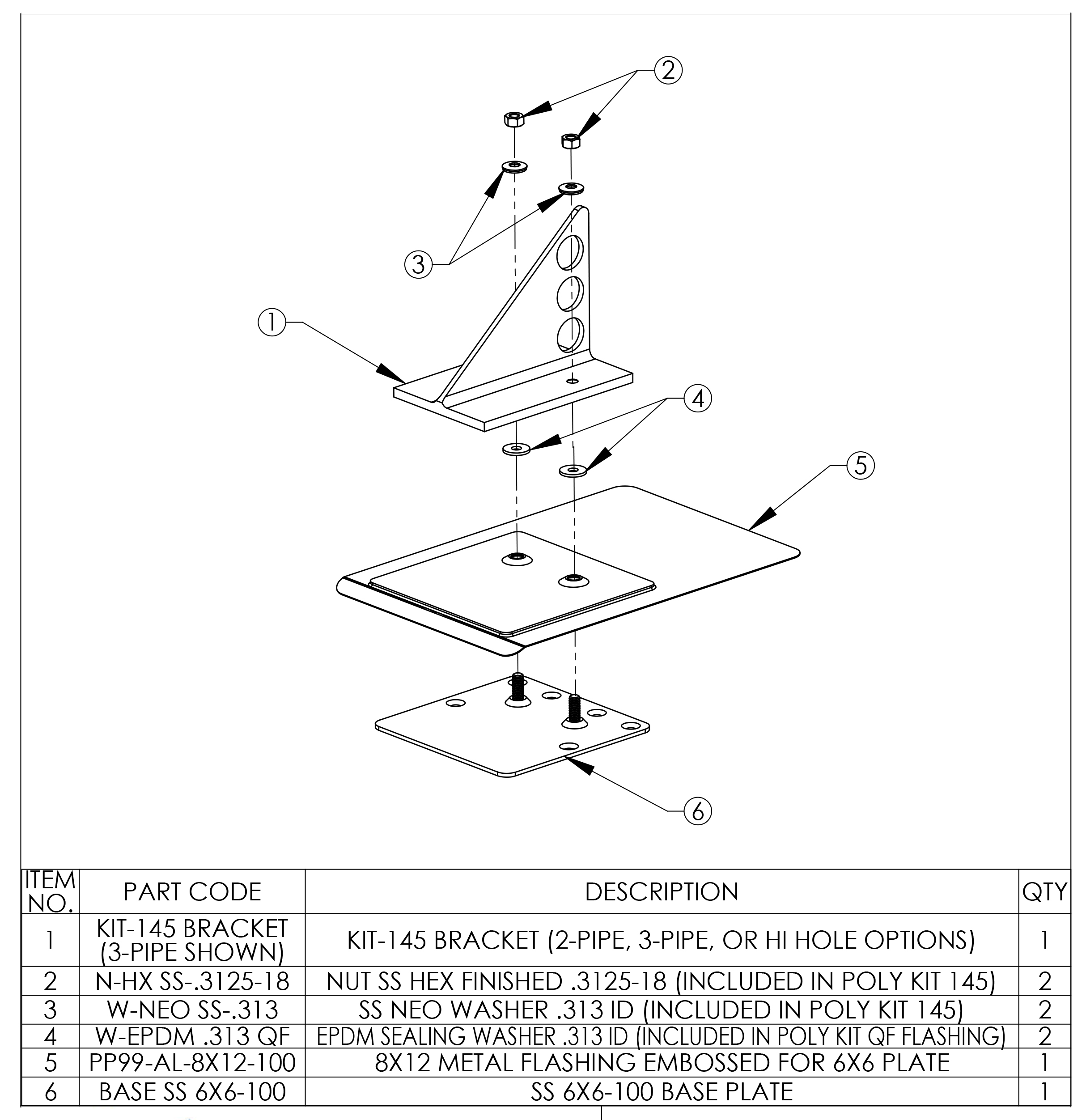 We completed the installation of the PP120 system during the first few days of November 2019, on the 12/12 pitch side of the roof. We received several snowfalls between November and January, none resulting in much accumulation.

On the night of January 16th, we received 6” of light snow. This snowfall event was accompanied by high winds out of the west, which is on the 7/12 pitch side. The wind lifted and transferred most of the snow that landed on the 7/12 pitch side right up over the peak of the building, redepositing it onto the 12/12 pitch side (see video clip below). Notice in the video that the peak of the roof is visible. The drifting snow accumulates into a nearly 12’ deep cornice near the peak. Below this cornice the snow accumulation is more even but tapers slightly to less accumulation towards the eaves. The composition shingle section in this video is the middle section. Notice that the shingles on the NW facing (7/12 pitch) are nearly completely scoured of snow.

In part one of this series, we chose to install our new Fusion-Guard on top of the 1st course of synthetic slate. This placement seems to have promoted melting of the snow along the eaves and may very well have functioned as a heat sink as more of the system became exposed to solar radiation. Read Snow Guard Performance Research: Managing Snow on Synthetic Slate Shingles for more information.

We didn’t install the Fusion-Guard on the composition shingle mock-up. Instead, we installed the PP120 pipe-style system, using traditional placement, on top of the 3rd course of shingles. This 3rd row placement approach has worked great over the past 30 years. However, Alpine will now begin to recommend that snow guards installed on composition shingles, synthetic shingles that are flexible, metal shingles and metal roofs in general, install the snow guards as close to the eaves as practical.

We will continue to recommend that snow guards be installed on the 3rd course of shingles on slate, tile and other rigid shingles that require cant strips at the eaves in order to create the proper stack of shingle thickness along the eaves.

The snow accumulation on this mockup is similar to the accumulation on the synthetic shingles we covered in Part 1. This is due to drifting that occurred as snow was redeposited from the 7/12 pitch side of the roof. The drifting created a cornice of snow at the peak that made for deeper snow from peak to eaves. Our observation is that the snow didn’t slump, crest or migrate on this composition shingle roof surface after accumulating. Instead, it stayed put and melted in place. This seems to be common on composition shingle roofs that are 7/12 pitch or less in regions with ground snow loads of 50 psf or less. Note that our mock-up is a 12/12 pitch in a 70 psf ground snow load area, and still no movement to date.

Wet, Heavy and Deep Snow will Avalanche off Composition Shingles

That being said, generalizations in this business can be dangerous. Last year in late March, and again in April, the central and eastern regions of the U.S. experienced at least two late-winter, wet, heavy and deep snowfall events. During these events, snow slid of all roof types, including composition shingles, causing extensive damage to gutters, shrubs, etc. I point this out because of the unusual moderate winter conditions we’ve experienced in these same regions this year. The snow was light, accumulated in relatively small amounts, settled and melted off. We hope to have some wet, heavy snowfall events throughout the rest of the winter to confirm the theory that wet, dense snow slumps against the snow guards.

We’re often asked if snow guards are required on composition shingle roofs. This is a difficult question to answer. On our mockup, given the events to date, we would have to answer no. But, as stated above, this has not been a typical winter in a 70 psf snow load area. I’ve seen snow slide off composition shingle roofs with shallower pitches. This used to be common in Vermont when normal snow accumulation had fallen, condensed, melted slightly (repeat 6-7 times), then a sudden warming spell would occur. In this type of condition, a layer of slush with a consistency almost like marbles seems to build up between the snow mass and the roof surface. This slush layer is more liquid than solid and the snow seems to slide off over it. Granted this doesn’t happen with every snow event, but it is not uncommon.

Snow did not noticeably slump or slide on the composition shingle portions of our mock-up. Given this winter’s conditions to date, the snow guards were not tested to the degree we would’ve liked. We believe that normal snowfall conditions in our region and/or a wet, heavy snowfall would have produced different results. Given the two latter conditions, the snow guards would be tested as the mass slumps. We hope to see such an event before this winter ends. We’ll keep you posted.

Over the course of the week following the January 16-17 snowfall event, temperatures plummeted (we hit -12° Fahrenheit here in Morrisville, VT). With the exception of snow compaction that typically happens within 24 hours of a snowfall event and a little wind-blown snow loss, the mass didn’t move much over the next 7 days, just like the synthetic slate mock-up.

We started to witness melting and dripping at the eaves, as warmer temps (low-to-mid 30’s) allowed the mass to begin a slow melt. Notice that the snow is deeper above the guards than below them. We believe that during drifting events, more snow built up on the upper 2/3rd of the roof. The placement of the snow guards aided in this accumulation up the roof slope.

Snow visited, resulting in yet even more snow (10”). Again, it was very windy, which resulted in the snow on the 7/12 side blowing up and over, dumping onto the 12/12 pitch roof on the other side of the building.

During the last week of February and into the first week of March, we saw a few days of warmer temps. The high temp here was 51° Fahrenheit. Then rain fell on top of the existing snow, transforming it into a wet, heavy, concentrated accumulation of snow and ice. Still no slumping or sliding.

Between February 10th and February 23rd, the snow mass melted consistently, resulting in the lower half of the roof (the area below the snow guards) being completely cleared of snow. On the right side of the mockup, notice that the snow is melted away from the snow guards in an upslope progression.

One theory is that pipe-style snow guards’ function as an interconnected heat sink.

A second theory is that heat accumulated under the soffit due to solar radiation – the absorbed heat then transferred up the façade of the building. Given the warm outside temperatures and large soffit, this second theory makes a lot of sense. If this is, in fact, contributing to faster melt at the soffit, this may contribute to a sudden icicle and ice damming release on unusually warm winter days. This would support the need for snow management devices, as well as the need to move the snow guard placement closer to the eaves.

As always, I’m open to reader comments and/or questions. If you have one you’d like to ask, feel free to email me directly at brian@alpinesnowguards.com. Alternatively, you can ask a question in the comments section of this post.

Sign up to start using our Online Project Calculator for an immediate layout and project pricing! Now, you can even ORDER ONLINE!