Working within the roofing industry has been a very eye-opening experience for me, both personally and professionally, whether for our solar roof mount division (EcoFasten Solar) or our snow guard division (Alpine SnowGuards). I have learned enough about both to fill a book, and it’s exciting to know there’s always more to learn. Through all of this learning, I have stumbled across some pretty remarkable rooftops the world over.  Check out 6 of these, that are bound to either make you smile, raise your eyebrows, or scratch your head – or maybe all 3.  You just may be inspired. I know I am.

This 102’ catamaran, the MS Tûranor, which means “power of the sun” in Elvish (think Lord of the Rings) is the World’s largest solar powered boat. Holding 60 passengers, and Captained by Gerard d’Aboville, she runs entirely on solar power thanks to the 5,500 square feet of PV panels installed on her top deck.  Designed specifically as a research vessel, the MS Tûranor embarked on a mission last year in order for climatologists, biologist and physicists to document Gulf Stream measurements.  This data allowed them to gain a better understanding of the ocean and the atmosphere, and provided new insight about climate change.  Since she is emission-free, the team is confident in knowing that their collected data wasn’t skewed by exhaust fumes. 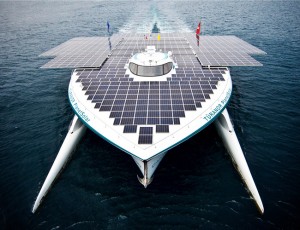 OK, so we all know that rooftop gardens have been trending in cities like New York, Chicago, San Francisco and LA, but this rooftop brings it to an entirely new level.  When I first saw it, my immediate reaction was, “what a lot of work!”

You think mowing your lawn is a chore?  How about adding your ROOF to the mix?  This home is located on the island of Sentosa, which neighbors Singapore, and this may be just a hunch, but I would bet the homeowners have hired a landscaper whose sole priority is taking care of this amazing roof. 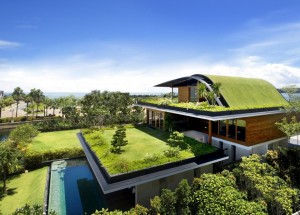 I once spent nearly a decade with a company that had me traveling extensively throughout Asia several times a year – my itinerary always included Hong Kong, Guangzhou (formerly Canton), Ningbo and then travel north, and eventually head home through either Shanghai or Beijing. The one thing that always intrigued me the most was not the sheer density of the population, not the unique foods you can’t find anywhere else, and not the unparalleled kindness and graciousness of the people who live there….what always left me speechless were the houses that were built, or were in the midst of being built, on the rooftops of commercial buildings.  I remember being in a meeting on the top floor of a building in Hong Kong and seeing, a few stories below me on an adjacent building, a man in a wide-brimmed hat tending to his rooftop raised-bed vegetable garden as his kids played on their swing set.  Behind the house, which even had a fenced-in “yard” with a little dog house, was a basketball court where 5 or 6 people were shooting hoops.  All on top of an at-least 10 story building. Wish I had taken a picture of that! 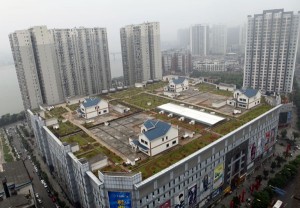 Check out this closed-in on demand roof on the Qizhong Forest Sports City Tennis Arena in Shanghai. There will be no rain delays here!  Built by Japanese Architecture firm Environment Design Institute, headed by Mitsuru Senda, this unique 3-dimension flower petal roof design covers 162,000 square feet and can be fully opened or closed in just about eight minutes.  Seating capacity is 15,000 and up until another tennis arena was recently built in Beijing, it was the largest in Asia. 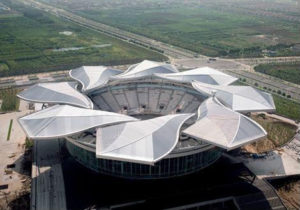 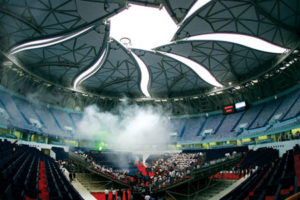 The city of Dubai has long been known for its wondrous structures that seem to defy logic (and in some cases, gravity).  There’s the Ski Dubai building, the Palm Islands (sometimes called the 8th Wonder of the World), Dubai Sports City and the aptly named DubaiLand, to name just a few.

But perhaps the most interesting building in all of Dubai is the Burj Al Arab Luxury Hotel.  The hotel, in operation since 1999 is the only 7-star hotel in the world….wait, what does that even mean?  Is “5-star” really now more like “3-star”?

Built on an artificial island and resembling a massive sailboat from the sky, from land, or from the sea, the hotel features a rooftop tennis court, which I must say is pretty spectacular. 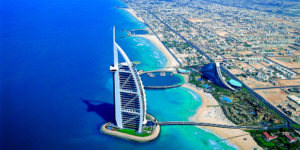 Just in case you’re becoming homesick right about now, how great is this roof?  Painted by New York artist Scott LoBaido, the Lamons Building in Houston, Texas sports the largest flag in the world, at approximately 3.5 acres, or 150,000 square feet!  As an added dose of patriotism, nearby William P. Hobby Airport sees many troops coming and going, and all are able to see this spectacular sight from the air.  What a sight for sore eyes this must be! 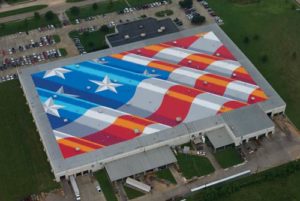 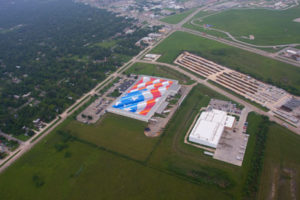 Rooftops like these show just how distinct a roof can be.  What will your next roof be?  Will you opt for metal, shingles, tile, membrane, slate, or shake?  Or something different altogether?  Will you choose to add solar panels, skylights, or a rooftop garden?  What about an elaborate painting?  The sky is (literally) the limit, and with so many talented roofing professionals out there, the next remarkable roof is likely in the works as you read this.

Until next time….stay connected.

EcoFasten Solar® and Sister Company Alpine SnowGuards® are industry leaders in the design and manufacture of patented, watertight solar roof mounts and components, as well as a wide variety of snow management systems.