Every year, every day, every hour, and every minute, a vast amount of energy is emitted from our greatest renewable resource, and the world is utilizing it on a grand scale.  But how did it all start?  Who are the geniuses behind it all and what milestones were achieved when?  Looking back at the history of solar power is like watching a movie stuck on fast-forward with an inevitable happy ending. 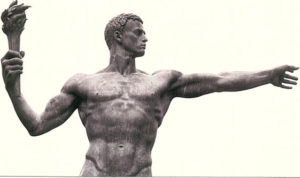 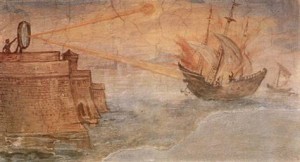 The Greek mathematician, engineer and inventor Archimedes sank enemy ships with fire during the Siege of Syracuse.  By using “heat rays” gathered thought a collection of various mirrors, he used the suns energy to concentrate solar energy towards approaching enemy ships.  There are historians who say this is myth.  The MythBusters crew actually devoted an entire episode to the myth back in 2006.  So, was the story “busted”?  It was. They found that an enemy ship would need to be completely still and at a distance less than half of that of the myth, even then taking far too long for the myth to be plausible.  But you know what they say – you can’t believe everything you see on TV. 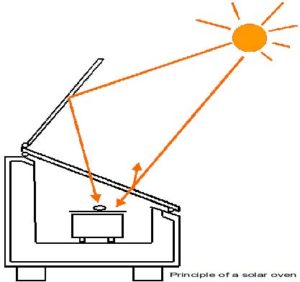 Otherwise known as a solar cooker, the first solar ovens were invented by a Swiss Physicist by the name of Horace de Saussure, and used sunlight to cook food. Almost 250 years later, solar ovens are still being used in parts of the world where there is limited access to electricity.  Because they only rely on sunlight for cooking power, no fuel is required. 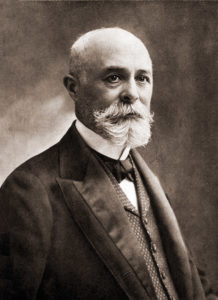 Three quarters of a century passed before a giant leap in solar history was made by the 19 year old French Physicist Alexandre Edmund Becquerel, who discovered that an electric current is created when certain materials are exposed to sunlight.  He was experimenting with two metal electrodes that made up an electrolytic cell. 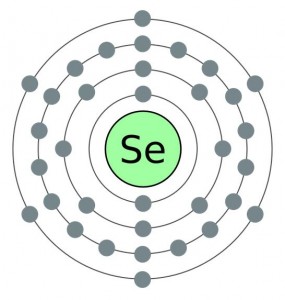 William Grylls Adams and his student Richard Evans Day discovered that by exposing light to the non-metal chemical element Selenium (“Se” on the periodic table), electricity resulted.  This was the first time it was known that electricity could be produced by using light without any moving parts, and through this discovery, the modern solar cell grew roots. 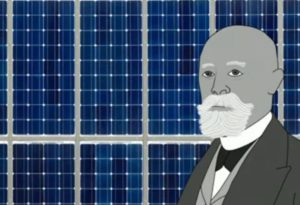 An American steps onto the scene.  Charles Fritts, an inventor, covered a selenium semiconductor with an almost undetectable layer of gold.  This resulted in an electrical efficiency conversion of only about 1% though, and due to that fact and the high cost of materials, Selenium cells were not used for supplying energy (but they were used into the 1960’s as light sensors for timing exposures in cameras). 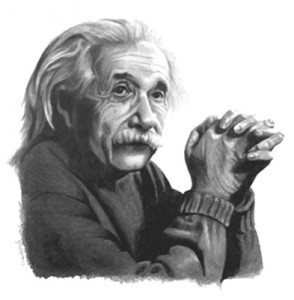 Albert Einstein formulates the photon theory of light, which explains how light frees electrons on a metal surface.  16 years later, in 1921, he goes on to win the Nobel Prize for this scientific milestone.

This time it is a Polish scientist who makes a new breakthrough.  Jan Czochralski devised a method of growing single-crystal silicon, setting the framework for silicon based solar cells.

In 1939 Russell Ohl, an American Engineer working for Bell Labs, discovered the PN Barrier (or P-N Junction).  Back then, very few scientists were aware of the impurities of crystals, but Russell figured out how it works.  As it turned out, it was those impurities that were actually delivering varying degrees of resistance to the flow of electricity in different areas, and he began to understand that the barrier between those areas was actually the very thing that made the crystals work (yes, that’s a mouthful).  He then discovered that by super-purifying the chemical element Germanium, repeatable and usable semiconductor materials for diodes (semiconductor devices with 2 terminals) could be formed.  This work with diodes led him down the path of developing the first solar cell, which he patented in 1941. 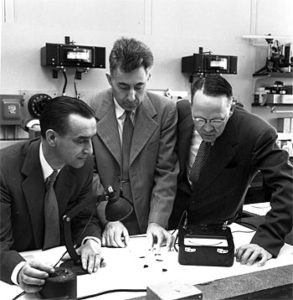 Daryl Chapin, Calvin Fuller and Gerald Peterson, also working for Bell labs, discovered silicon as a solar cell, which was efficient enough and produced enough energy to power electrical devices (small electrical devices, but still quite a find).  Upon hearing this news, the New York Times proclaimed that this innovative breakthrough was “the beginning of a new era”.  On April 25, 1954 Bell Labs unveils a solar battery that can convert light into electricity. 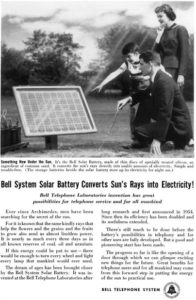 1956 was the year of the first commercially available solar cells.  Exciting news, right?  Well, I suppose only exciting to the very, very few people who could afford it.  The going rate was $300 for a 1W cell.  Since most people could not afford this new technology, it is understandable why 1956 is also the year toys and radios started being manufacture employing the use of solar cells.

Solar cells powered the U.S. and Soviet space programs initiatives in the late 50’s to early 60’s, setting the precedent for satellites still in use today.

The early 1970’s brought about an Exxon research study with the goal of making the solar cell a more cost-effective product.  Why Exxon, you ask?  Many ships in their fleet of off-shore oil riggers had warning lights that were powered by solar cells.

Change and growth came at a rapid rate between the 1970’s and the 1990’s, including such notable events as President Jimmy Carter having solar panels installed on The White House, to be removed by President Ronald Reagan less than a decade later.  Solar cells soon started being used to power homes, and on devices like railroad crossings and telecommunications towers.  Where “line” power could not be reached in some arid desert locations, solar power brought water to the dry, cracked soil.  Solar power was finally truly attainable in the present, and that gave us great hope for the future. 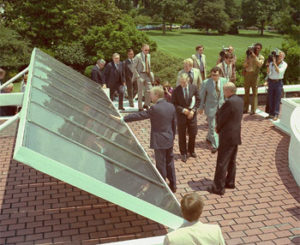 The future is now.

For more information about our line of products, visit our all new website or email info@ecofastensolar.com

Committed to the connection