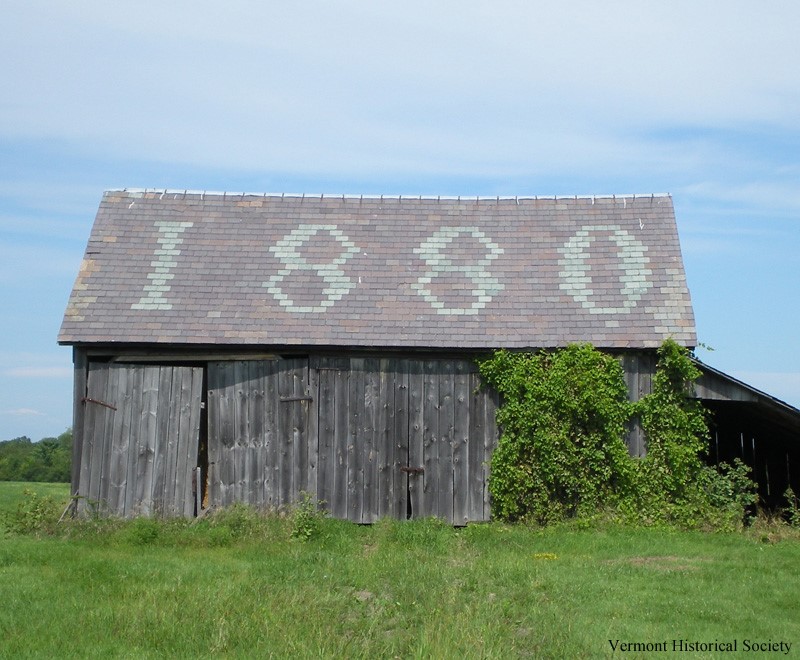 I’ve got to hand it to Emri W. Clark of Nashua, New Hampshire. His snow guard invention, patent # 625,144, awarded in 1899, is probably the single most knocked-off pad-style snow guard design that I’ve seen – and for a few very good reasons. 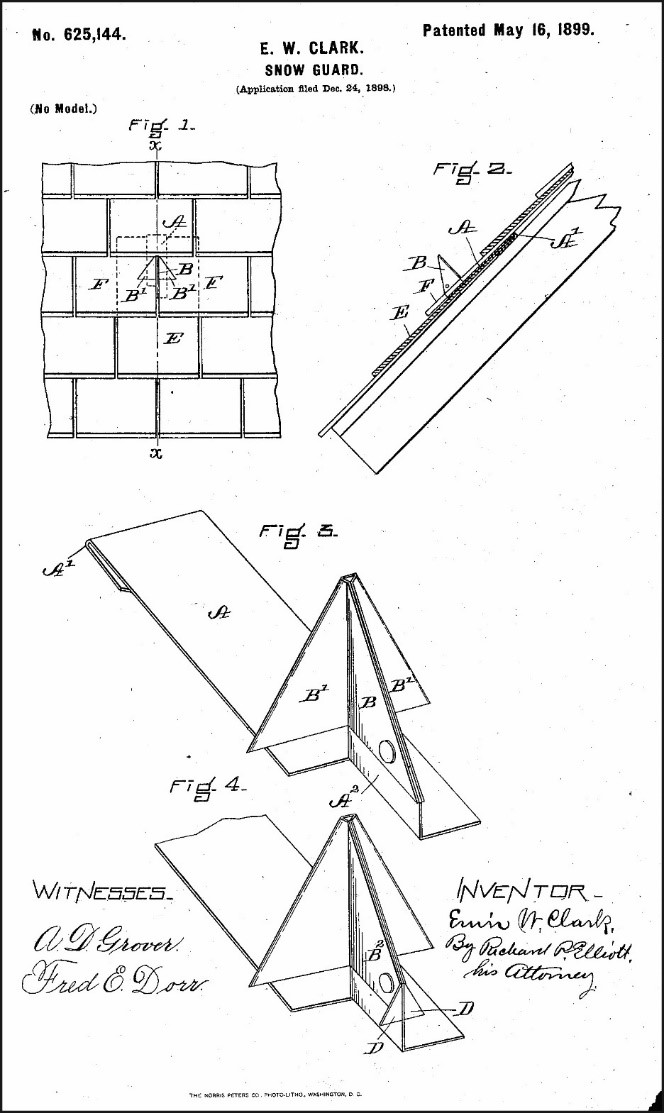 First, I can’t help but to speculate that Emri himself must’ve been a slate roofer. He seemed to understand that the material he was designing for, along with most of the related nuances. For example, he designed his part to work with 1/4” thick slate. At this point in history, slate was being produced in great volume in both Pennsylvania and New York. The material was coming out of the ground fast and green (yes, the quarrymen of the era referred to the stone as green because it was still damp when they were splitting it). This gave them the distinct ability to split the stone more uniformly and consistently (3/18”-1/4” thick) than stone that isn’t processed quickly.

Emri lived in an era when slate was produced in such large quantities that most roofs were installed using just one size slate (20”, 22” and 24” lengths by 10”-12” widths were very common for this time period). This means that if a roofer requested 100 squares of 22” x 12” standard thickness slate, he got just that. It was rare during this era to see multiple-width slate roofs because the quarries were producing in quantities that allowed for one size in large volume (as an aside, these roofers probably always requested 24” x 12” slate because it had far fewer pieces per square (114 pieces, versus 160 pieces per square of 18” x 12” slates).

The point is that the roofers of the day may have needed to compromise on the desired size, but it’s safe to say that they were rarely faced with having to accept random widths (this is just the opposite of the slate sizes that were available to slate roofers in the early 1980’s, when slate production was way down).

Back to Mr. Clark…… he discloses in his patent application that his part will fit any length slate. He understood this, knowing that slate (soon to come in the form of a synthetic, yes, even in the early 1900’s – asbestos shingles) were all installed using the same basic principle of a 3” head lap to achieve watertight integrity. 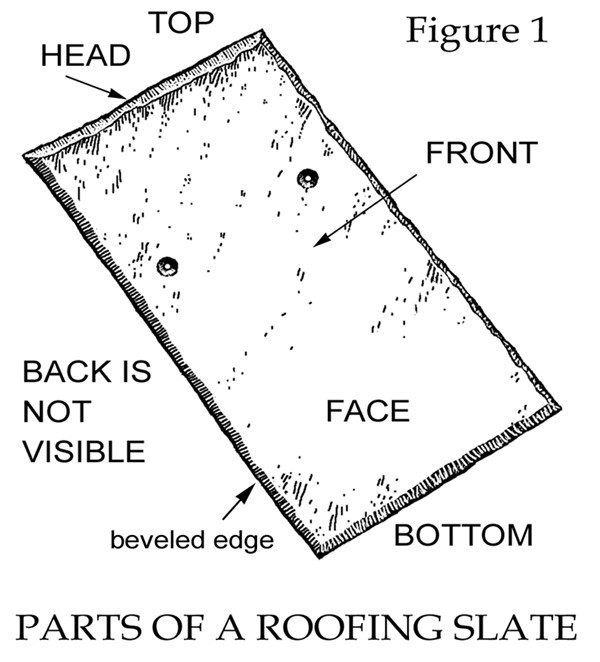 The importance of the standard slate thickness allowed Clark to produce a piece that could be installed on nearly any slate or synthetic slate (asbestos) roof by inserting the piece between the vertical joints of the adjoining shingles while relying on the 3” head lap to ensure that they were always long enough to clip over the head of the shingle it rested on. Furthermore, Clark understood that distributing the snow over a wider, thinner, sheet metal strap would allow the shingles to lay flat (unlike the thicker bar-type straps he had likely been using). And he didn’t stop there. What I love most about this patent is that he mentions in the application that his design would allow for installation of any roof, “new or old”.

In my opinion, Clark was brilliant – this is obvious by the fact that there were many others who endeavored to knock him off in later years. He was a real inventor. More importantly for modern-day discussion purposes are the three simple words, “new or old” that are so seamlessly added to the patent.

My take on this is simple but direct. In the late 1800’s building owners were not always aware that installing slate (or asbestos) shingles allowed the sloped roof to dump snow like an avalanche. Imagine that! Clark recognizes a need for, and devised a part that could retrofit an existing roof.

Is history repeating itself? If you know me by now, you know that I’m going to beat this theory up mercilessly over my next several blogs. 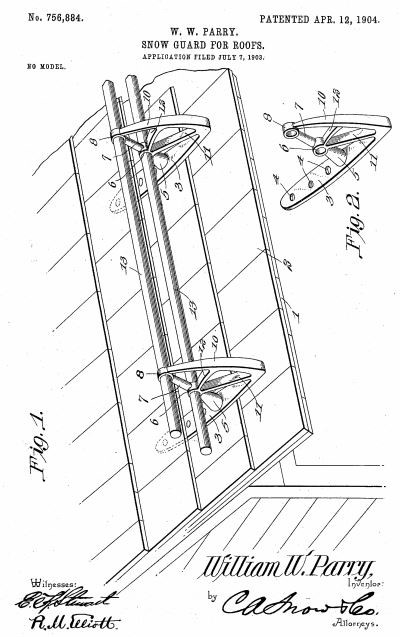 What I find interesting about this device is that it seems to be designed to sit on top of, and screw through, fragile shingles. If you follow the logic behind the brilliant Clark pad-style design, you’d agree that Clark had a need, and developed a solution to meet his need. I would be willing to bet that Parry had a casting operation, saw a pipe-style snow guard, or was asked to make one, and really didn’t have an understanding of the roofing materials that these were going to be used on.

We began with snow guards from the turn of the 20th century. I suppose for the sake of continuity, I should wrap things up with this: In 1906, Sieger patented a device, patent #834,081, that incorporated a thick strap and a cast snow pad. It had its place and functioned fine when installed by knowledgeable roofers. However, it would retrofit like the product Clark devised. 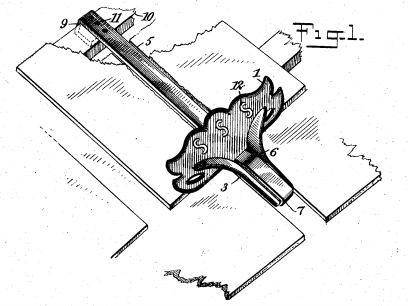 That said, it wouldn’t twist and bend over like Clark’s design, so functionality was being addressed as the pad-style market evolved. History really does repeat itself…the same functional evolution is happening today, with the primary differences being in ever-changing shingle products and styles. What worked for standard thickness, one-width shingles back in the early 1900’s wouldn’t necessarily work with the interlocking, random width and thickness shingles, metal shingles, tile, or modern membranes of today.

So, there it is – snow guard designs around the turn of the century. Just as roofing technologies have evolved since 1899, so too have snow guards.

Check back on Tuesday when we’ll be spending some time in the Roaring Twenties – a decade that saw many changes including a surging economy that created an era of mass-consumerism, the growth of Americans who owned cars, the advent of the radio, women gaining the right to vote, flappers, the jazz age and prohibition.