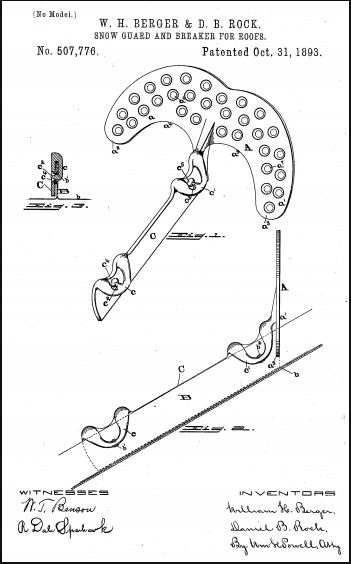 I’ve spent a good deal of time combing over old notes, documents, and patents.  I thought it appropriate to point out a concern about the credit given to Emri W. Clark in my previous blog. Let’s explore snow guard evolution a little further.

First, as with all patent claims and awards, the public assumes that the owner of the patent is truly the inventor. I mean, after all, the government has given the patent rights to the person identified in the application and award. The point I want to clarify with these blogs is that I’m sharing information that I believe to be correct. It’s possible, if not likely, that ideas existed that had not been claimed for patent rights, ideas from various patents were combined, or possibly ideas used for patents like the J. Rupp patent, #1006796, titled Snow Fence (below) and used in the railroad industry, were cleverly incorporated into other industries. To Clark, I still give much credit unless or until proven otherwise. 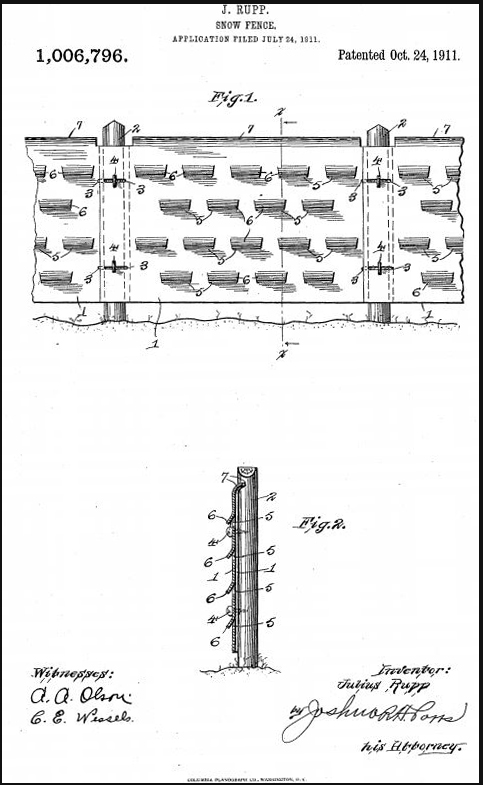 The previous disclaimer was intended to set up a good deal of the discussion to come. Overall, the period for this blog post was relatively quiet, in terms of snow guard evolution anyway. There are probably multiple contributing factors that could explain some of this, and I believe that some of it relates to having a sufficient number of snow guard devices, available commercially, that served the needs of the industry.

Similarly, wire loop snow guards (like the one shown below) served the region surrounding Washington DC, Delaware and southern New Jersey due to snow retention needs, but typically in less volume. 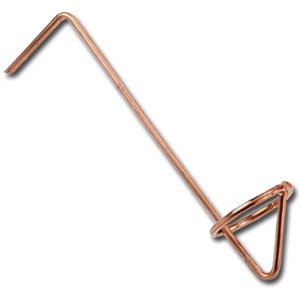 By the same token, many pipe-style designs emerged out of larger cities that all seemed to have serviced metropolitan needs in larger cities (like the Baird patent #529,774 from 1894, the Howe patent #42,992, the Rogers patent #97,316 and the Hathorn patent #106,580. The latter three were all from Worcester, Massachusetts). 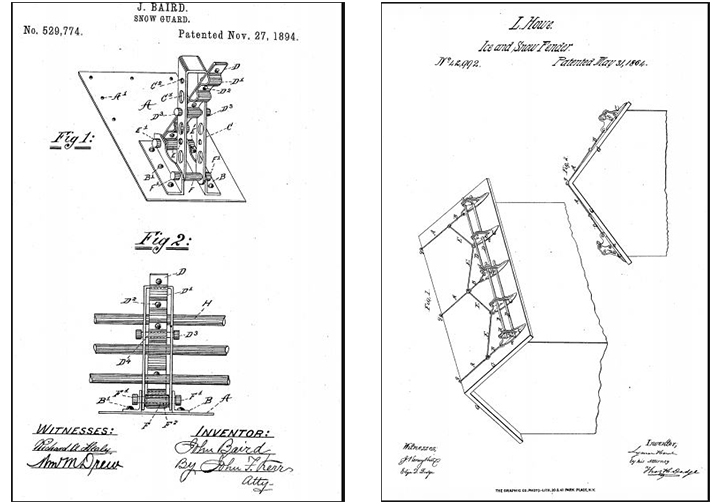 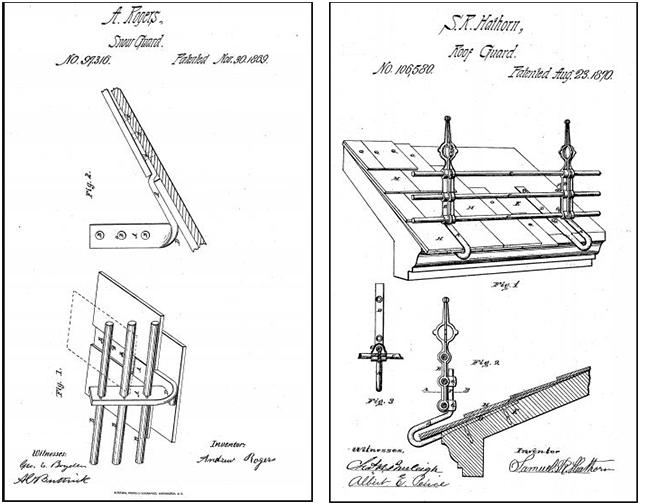 WWI was another factor that most likely contributed to this time period being on the quiet-side for snow guard patents. We’ll see a similar lack of snow guard patent activity in the 1940’s and 1950’s. 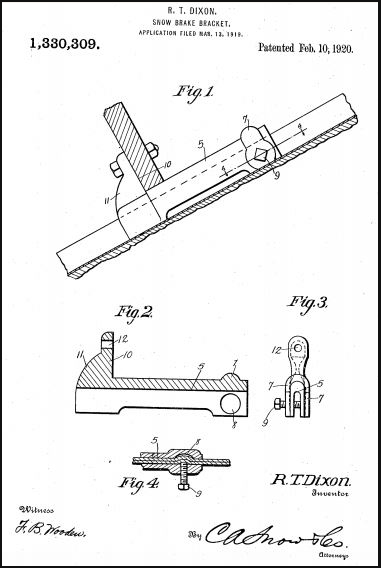 The thing I love about this design is that it’s the first snow guard I’m aware of that used a set screw to attach a bracket to a metal standing seam without actually penetrating the seam. What I find so fascinating about this is that later on, starting in the 1990’s, a flurry of patent activity seemingly surrounding the same technology took shape.

Coincidence? Maybe, but if you read the patent claims for a bracket attached to a standing seam using a set screw that pinches a seam into a “boss” that opposes the set screw, which then has a snow fence or brake connected between brackets, is so shockingly similar that Dixon would appear to be the genius behind the standing seam snow guard industry. Prior to Dixon, the only clamp-to-seam device that I’m aware of was Berger’s patent #507776. This device pinched the seam without using a set screw (see below). The pad-style snow guard market was very quiet during this era. 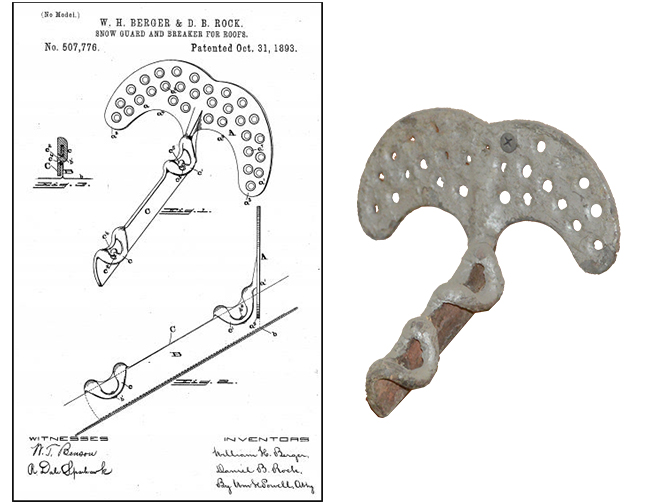 The E.E. Histand patent #1222953 was an attempt at making an affordable sheet metal variation (below). 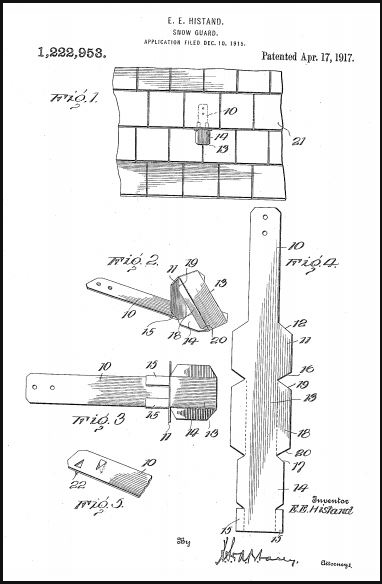 And yet, aside from potential construction slow-downs as a result of WWI, the country was growing. Slate, tile and metal roofing were commonplace.

So why so little activity? I believe that this, too, parallels a phenomenon that repeated itself in the 1990’s and early 2000’s.

The same phenomenon is repeating itself yet again, as new roofing products such as synthetic shingles, membrane and even glass (solar applications) are introduced.

No, not in the form of the misguided award of multiple patents for a device that was introduced in 1919. It relates to the beginning of an understanding about how snow guards worked.

Yes, I believe history repeated itself. In the late 1800’s, building owners knew they needed to manage sliding snow and ice from roof surfaces, but neither the building owners, architects, builders, product manufacturers or roofers knew exactly what to do or how to do it. Because of this, they practiced solutions trying to get it right.

Wondering about snow guard evolution in the time period of the 1920’s to the 1930’s? Well, you’re in luck! My next blog will be focused on the era of the Roaring Twenties!