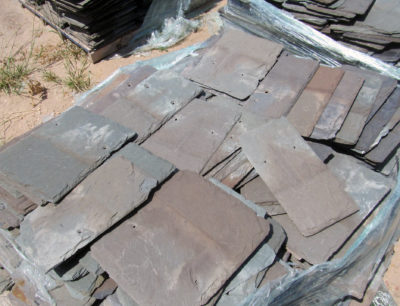 Back in 1983 I was living in Vermont, taking on some slate roofing repair jobs, the occasional small addition (2-3 roofing squares), cleaning out bird droppings for church steeple projects and was generally just trying to figure out how to make my way.

By chance, as I was focusing on slate salvage, I had run into Clark Hicks of Evergreen Slate Company. In hindsight, I think Clark took pity on me. He realized I was willing to work hard enough to take slate off roofs to reclaim it, and on more than one occasion prior to 1983, he assured me that if I put my energy into installing slate, instead of removing it, I would make a much better living. I was sure that he just wanted me to buy new material from him, but nonetheless, a friendship evolved.

In the Spring of ‘83 Clark called me to say that there was an opportunity to bid on a project in Franklin Lakes (Bergen County), New Jersey. It had been a long, cold winter with little work, bills were mounting, my first child was a year old, and the outlook wasn’t great.

Let me set the stage a little…. I had never been to Franklin Lakes. I was living in a poorly winterized lake cottage. Within about 3 months my rent would triple as summer demand increased value. My “truck” was actually a beat up 1972 Chevy van and pretty much everything I owned would fit in it. Nevertheless, I was always goal and dream-driven. I wanted to buy a house and had spent a fair amount of time pursuing the classified ads for good deals.

As the saying goes, be careful what you wish for – you just might get it.

In my small hometown of Brandon, Vermont, I found a really great deal on a house. It was a farmhouse that had been converted into a home with a small apartment. The rental income would cover most of the mortgage. With the property, came a barn and a small steel building, both of which were ideal for roofing/construction purposes. All of this on 4 acres of land. The asking price was $45K. In retrospect, I can’t believe how affordable this property was. The problem was that I was broke, had college loans, and couldn’t seem to save a dime. So, when Clark at Evergreen called to say he may have an opportunity for me in NJ, as much as I was young, green and rooted in my country boy life, I was game.

What I didn’t know about this project was that it had already been awarded to a roofing contractor in north Jersey – this local guy was a subcontractor for a local custom home builder. The home builder had his guy who serviced all of the builder’s roofing needs. This is where it started getting a little sticky.

The couple who were building this three-plus-million-dollar home were in their early 30’s. Turns out the local roofer made a comment to the wife that didn’t sit very well. She called Evergreen, who called me. I showed up in my beat-up van, was very polite and, frankly, awe-struck at the size, scope and cost of this home that could’ve been on a post card. I talked the talk and established enough of a comfort level with the couple that the builder agreed to let me bid.

Lesson 1: All I had to do was show up, act smart, be humble (trust me, that was no act), and provide a reasonable price. The job was already mine through Evergreen’s recommendation – I just hadn’t realized it.

So, I took the plans, headed back to Vermont and started working on an estimate. I sliced, diced, checked and double-checked my numbers and no matter how I looked at it, it was an $80K bid, not including the slate (which the builder had already purchased). Now think about that. I really wanted a small farm on 4 acres in Vermont that had a price tag of $45K, and here was a roof that all-in was going to cost about $100K. It just didn’t make sense to me, but that’s the way it was.

Now I had never been accused of being a great businessman, but I knew that this was a bid that needed to be presented in person. I desperately wanted and needed this job. I figured if I had grossly over-estimated, at least I could backpedal in person and try to salvage the situation. So back to New Jersey in the van I went. Fortunately, that old van gave me no problems on my Vermont to New Jersey treks. I arrived on site to meet the builder, his superintendent (who was very close to the other roofer) and the couple who were building the house.

The stage was set. I presented for about 20 minutes before the wife said, “Brian! What’s the number?” I scuffed the dirt, hemmed and hawed, stuttered and stumbled over my words. Finally, out it came – $79,500 -I had tried every way possible to get the number down, etc. At this point, the wife threw her hands up and stormed off. I thought I was sunk for sure.

The husband put his hand on my shoulder and said, “are you apologizing for your bid? Let me show you something. You see the kitchen in this end of the house? I’m hopeful that I can get this built for $125K but I think it will easily hit $150K. Are you telling me that you can do the slate roof for less than my kitchen? If you are, we’ve got a deal.”

Lesson 2: It turned out that the reason the wife was mad and had stormed off was because the local roofer, who knew nothing about slate roofing, was at $160K, and all parties were hoping I would come in somewhere close to that number. I figure I left about $60K-$75K on the table and vowed never to let it happen again (it did, just never to that extreme).

The end of the story is that I picked up stakes, moved to New Jersey for the next 8 years, learned a lot, made and lost a lot of money and never bought that farm in Brandon. Instead, I launched a career and quickly grew up.

That house? It’s on the cover of The Slate Book. 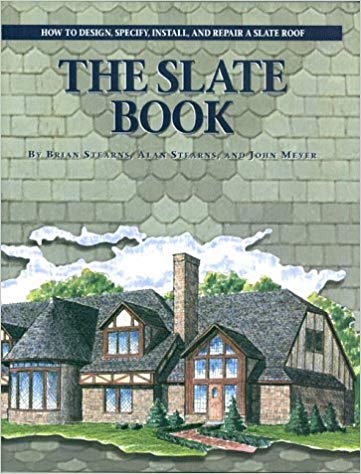 Subscribe to our monthly newsletter and keep up on the latest industry and Alpine news, products and upcoming events!

(Images from PurpleWave, Ello and Sourcecon)