In May of 2012, Alpine SnowGuards applied for (and was later awarded) a patent for a snow retention device that attaches to solar panel frames. Alpine continues to innovate new forms of solar snow retention in order to satisfy the needs of our customers. Let’s take a look at some of the ongoing complications, and how to resolve the problem of snow and ice sliding off rooftop mounted solar panels.

The most common roofing material solar panels are installed on in “snow country” are asphalt or composition shingles.

There wasn’t a sliding snow problem to solve prior to solar array installation. In fact, most of the inquiries we receive for solar snow retention come after the first winter, often following the first good snow fall. It’s usually after such an event occurs that the property owner realizes the danger of snow and ice sliding off the new array in one large mass.

The problem is obvious. The desire of the array owner is to generate as much energy from their array as possible. However, there is now a falling snow mass concern for the building owner that did not exist prior to the installation. Often the best placement of the arrays happens to be directly above points of egress, decks, hot tubs, driveways, sidewalks, etc., which makes the sliding snow off the roof even more dangerous.

Most new buildings constructed in the United States must meet local building codes. There are many codes; the one we are concerned with is the Ground Snow Load (GSL).

GSL is applied to roof structural calculations which is then reduced by a factor of 0.7 according to the American Society of Civil Engineers (ASCE) (7- 16, Chapter 7 “Snow Loads” and the roof pitch). To avoid confusion, these snow loads are estimated to withstand the weight of a 50-year storm.

The Problem with the 5% Rule

Arriving at roof design snow load values are not complicated. However, a commonly accepted practice within the structural engineering community goes something like: “If it is desired to add a structural element to a building’s roof surface, the imposed load should not be more than an added 5% of the design load.”

Applying this 5% rule to the reality of adding solar panels to a roof surface creates a problem. For example: GSL is 30 pounds per square foot (psf), the flat roof snow load is 70% of that, or 21psf. Therefore, the roof design snow load is 21 pounds per square foot. This is where it gets a little tricky. According to “Energy Sage”, the average solar array weighs 2-4 psf. In this example of a roof design snow load of 21 psf, by adding the low end of the estimated weight of a solar array (2 psf) the structure now has nearly 10% added to its roof design load. This is more than the engineering “Rule of Thumb”, that says no more than 5% added weight before structure comes into question. 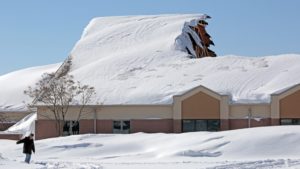 How is it possible engineers allow these roofs to have solar arrays installed on them? It is important to stress that all of these calculations and building codes have built in safety factors. There should not be a case where the added weight of a solar array leaves the design unsafe. On the contrary, the engineering community is operating with industry accepted rules designed to facilitate safety. Certain roof surfaces including metal, slate, glass, rubber, and plastic membranes with smooth surfaces, are slippery. The answer is “slippery surface” load reduction.

This allows the engineer to reduce the roof snow load further based on roof pitch and other factors that vary (see ASCE 7-16) up to as much as 37%. Using the example above, this means by adding solar panels to the roof at 2-4 psf you actually reduced the loads that the roof was originally designed to support.

Note: The calculation above was reached using the ASCE 7-16 guidelines. Drifting and other factors are not considered in this example.

What This Means for the Property Owner

That’s correct! You, the building owner, upon agreeing to installing a solar array, have accepted that to be within standard engineering practice, the array will shed snow and ice.

This may be okay if there is nothing in the path of the avalanche.  However, you need a way to manage a slower release if you don’t want your solar array to shed snow and ice all at once above areas of safety concern. To be perfectly clear, you cannot retain the snow and ice on the array indefinitely due to the structural issues as previously mentioned and a loss of power generation. From a functionality perspective, you would not want to restrict energy collection for a long period of time.

This is where Alpine SnowGuards comes in. Alpine has several solar snow management products that clamp to solar arrays that will help to slow the evacuation of snow and ice from a solar array.  Alpine receives many calls from customers looking for solutions to prevent all snow and ice from quickly evacuating the panels. If you’ve followed engineering and structural design practices above, you understand this cannot be done without creating potential structural issues.

Alpine SnowGuards offers a comprehensive three-part Solar Snow Management System – the first and only of its kind on the market.

Based on experience and customer feedback, what the industry really wants is our latest innovation. We accommodated evolving demand with the Solar Snow Dog.  The best performance is achieved when it is paired with Solar SnowMax Universal bar system and a roof-mounted pipe-style snow guard to protect the snow landing zone below the array.

There may be times and conditions where snow accumulates to depths greater than 6”. If this happens, it is the responsibility of the building owner to clear the excess accumulation. This will ensure structural integrity of the solar array racking system and the building structure. This helps protect critical safety areas below the array and allow for more power generation.

Use of these devices will vary from customer to customer depending upon their experience, geographical region, and desired effect. In general, panels installed in portrait will use two pads per panel. Panels installed in landscape will use three pads per panel (both having the Solar SnowMax Universal at the leading edge). It is the decision of the installer, the building owners desire and structural limitations of the project.

This combination of systems will help slow solar avalanches and allow the arrays to clear. It will simplify snow management solutions on solar arrays and allow distributors to stock a standard solution.