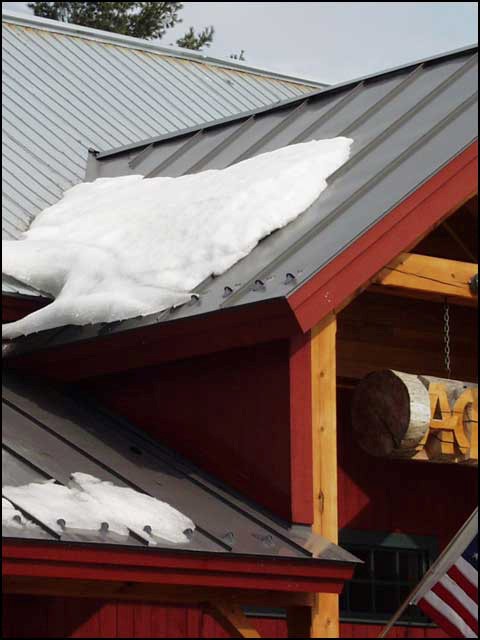 Believe it or not, this is a highly debated question within the construction and snow retention industries. It’s a common misconception that snow guards are intended to break up snow and ice into little pieces, basically cut up the mass, so that it comes off in smaller pieces. It’s easy to understand how people with limited knowledge of snow retention might think this. So, how do snow guards work? Read on!

Traditional pad-style snow guards are intentionally manufactured to be wider than they are tall – this prevents the pads from toppling from side to side. The flat strap you see on most pad-style snow guards is there in part to reduce lifting, while the cupped “cap” holds snow more effectively than those with no cupping. We’ve even seen some with the cupped “cap” inverted, so it tends to function more as a snow deflector than as a snow management device. 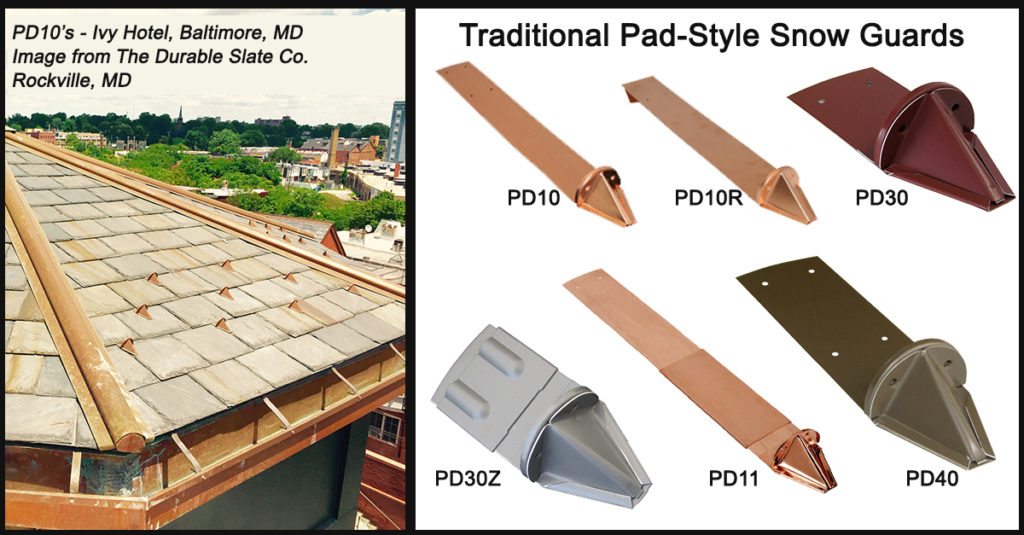 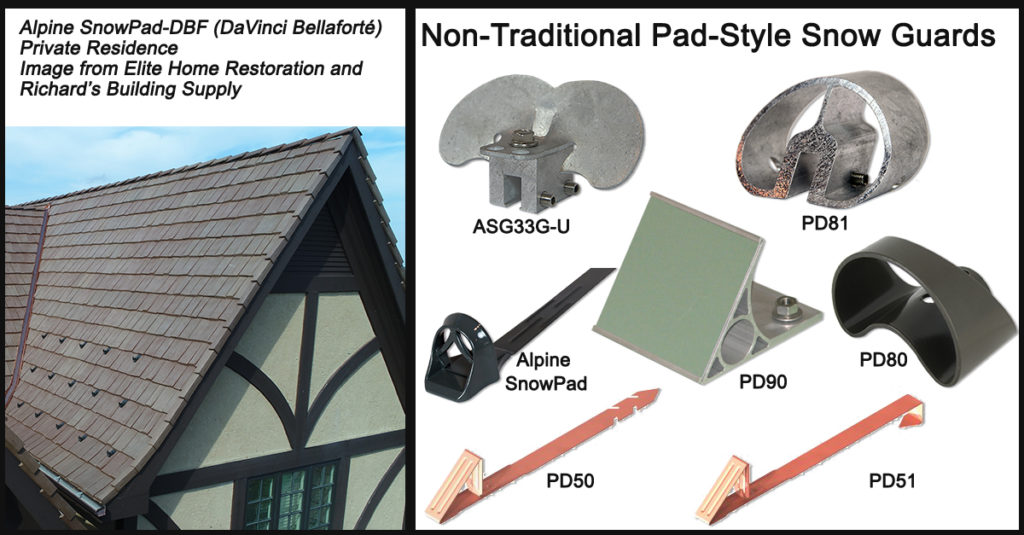 Wire loop snow guards are an entirely different animal. They are a variation of pad-style snow guards that we haven’t touched on yet, and although they are probably the epitome of “traditional”, they aren’t being utilized as often as they have been in the past.

Turns out there’s a good reason for this. 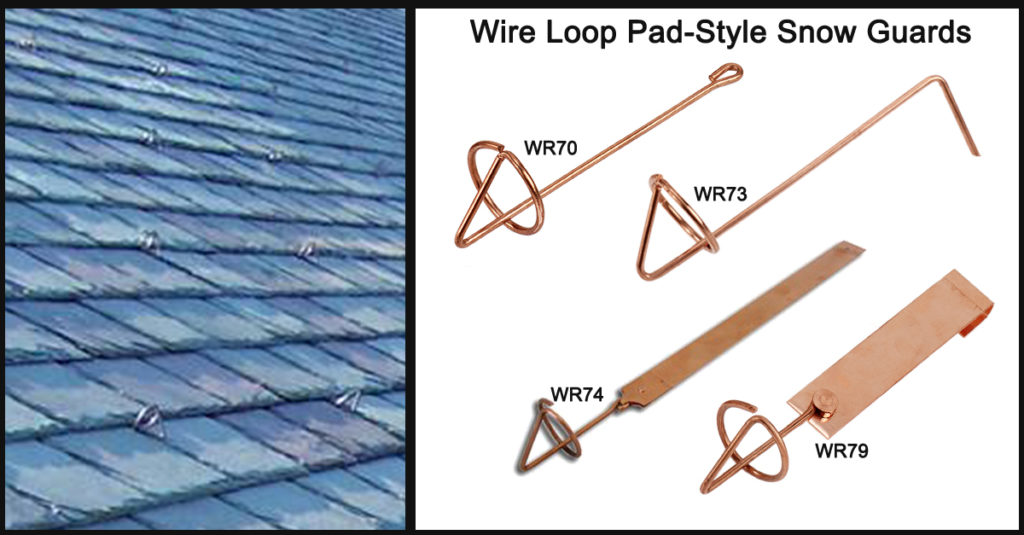 One of the Most Effective Snow Retention Systems

In the early 1990’s wire loop snow guards were often used on slate roofs. In my opinion, they are one of the most effective snow retention systems available for natural slate roofs – when used properly. Proper use is when a wire loop snow guards is installed with every piece of slate over the entire surface of the roof. This essentially creates a wire “mesh” over the roof.

Expensive When Laid out Properly

While wire loop snow guards work so well, there are a couple of issues with them. When used properly, they’re one of the most expensive snow management systems available. Individually, they are one of the weakest snow guards, at a structural value of only about 50 pounds per guard. Do you see the problem looming?

In the 1980’s and 1990’s, as slate became more popular, roofers who didn’t understand how snow guards work started installing wire loops in a two-to-three row pattern around the eaves of slate roofs. Needless to say, these guards were flattened in the first year. End result? Customer expectations were not being met, roofers blamed the snow guards, wire loops got a bad name and, as a result, have more or less disappeared from the market.

When it comes to managing rooftop snow, I’ve seen it all, including straight pins on the roof that looked much like a Chinese pinball machine. In 1920’s Vermont there was a roofer who used a metal strap-like device (looked like a stirrup on a saddle) arranged in a pad-style array. These styles/approaches are attempts to add friction to the roof surface. Picture the granules on a asphalt shingle roof. The granules function as friction.

Side Note Sets the Record Straight

Side note: I once sat in on a snow retention presentation from one of our competitors. The presenter had some great PowerPoint slides showing snow retention devices in Europe. Most of the slides were very educational – until a slide popped up showing various sizes of rocks, some as big as basketballs, sitting on a cedar (or some sort of wood) shingle roof. This presenter, well known throughout the metal roofing industry, went on to say that much like granules on asphalt shingle roofs, homeowners in Europe will add rocks to their roofs to add friction. Supposedly they do this in the fall by using running water to freeze the rocks to the roof. SAY WHAT?! 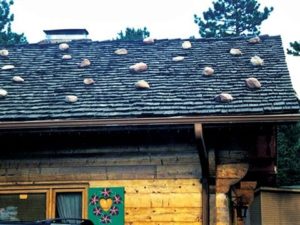 This is a classic example of someone who should not be giving snow retention advice. It seems this is a fairly common misconception. These rocks were actually placed on the roof to keep the wood shingles from curling as they dried out. Back in the 1700’s and 1800’s, when cedar shingles were available in long, 30”-36” lengths, installers would often wire lumber or small branches on top of the shingles to reduce curling. The unintended consequence was snow retention. However, I can assure you that any right-minded individual would never lay loose rocks on their roof at the risk of them being pushed off by a roof avalanche, potentially causing catastrophic damage to people or property.

Simply stated, the more friction added to the roof surface, the less sliding of snow and ice will occur. Rarely do building owners want to see friction added in the form of wire, pads or posts, so what ultimately ends up happening is that arrays of pads are installed over a roof surface to add “some“ friction.

Manage the Release of Snow & Ice

Adding these arrays of pads creates a functional design that can best be compared to (here’s that reference again) a Chinese pinball machine. The snow and ice will start to melt, slump, and slide around the pads. The mass will begin to creep off the roof in small amounts – be advised, it still comes off. The intent is to manage the release so that it doesn’t come off as an avalanche, but indeed still comes off a little at a time, in the form of small chunks or pieces. This may be why there’s a misconception about cutting up the snow when using pads. 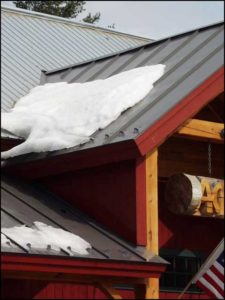 The idea is not to let all the snow and ice go at once as small pieces. The idea is to manage the release of those small pieces through added friction of the “correct amount”.

I hope this has helped to clear up any misconceptions that exist about pad-style snow guards. Stay tuned – my next blog will be all about pipe-style snow guards. In the meantime, don’t forget that I welcome roofing related questions – you can post your questions in the comments, or feel free to email me directly at brian@alpinesnowguards.com.