With Spring Training well underway, I wanted to give a very public nod to the Major League Baseball organization of teams for their commitment to the use of renewable energy.  Did you know that a decade ago, MLB became the very first professional sports league to enter into a partnership with the Natural Resources Defense Council (NRDC)? I have to say, this knowledge makes my love of the game even stronger than it already is. 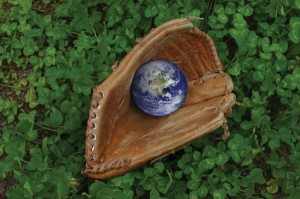 In case you’re not familiar with the NRDC, the self-proclaimed (and rightly so) environmental action group was founded in 1970 with the mission of protecting our land, air, and water from outside sources of pollution, and from the greed of the 500-pound gorilla corporations that we all know exist. According to the New York Times, the NRDC is “One of the Nation’s most powerful environmental groups”, and the National Journal says that the group is, “A credible and forceful advocate for stringent environmental protection”.

When the 2 organizations first sat down to meet in 2005, the discussion centered around a “league greening initiative”, and it was during these talks that the Commissioner’s Initiative on Sustainable Stadium Operations and Team Practices was formed. Their first order of business? The NRDC Greening Advisor, an online environmental resource guide (and recipient of the 2008 EPA’s Environmental Merit Award), that ensures each team and stadium owner not only identifies, but also actively pursues operations that are environmentally exceptional. Some areas of special consideration center around stadium maintenance, stadium and office operations, stadium energy consumption, fan and team transportation, paper use, energy use, concessions, event planning, waste disposal, and recycling management.

Since 2005, pretty much every ball club in the league has put environmental initiatives into place through the NRDC, and are pulling out all stops in tracking their successes, making MLB the first professional sports league in the country to not only design, but implement a data collection and analysis system geared solely towards environmental issues.

Pretty commendable, right? Here’s what former Baseball Commissioner Bud Selig had to say at the onset of the partnership: “Baseball is in a unique position to exert positive influence in the area of environmental stewardship. Just as Baseball took a leading role in the development of relations between the races in the United States, with the appearance of Jackie Robinson for the Brooklyn Dodgers in 1947, so must it turn its attention, efforts, and influence to other important social issues. One of those issues, which is inextricably linked to all aspects of our game, is care for the environment.”

Here are a few highlights from a handful of the ball clubs around the country.  I won’t promise I’ll hit your favorite team here….being a born and raised New Englander, I’m most in tune with the Red Sox and the “evil empire” Yankees (cue “Imperial March” music from Star Wars). So, to me anyway, the Red Sox organization seems like the perfect starting point: 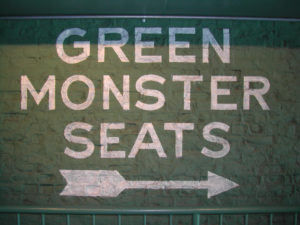 The Green Monster has become even greener since the club partnered with the NRDC back in 2007, adding an improved recycling program, upgraded trash removal, biodiesel-fueled lawnmowers, a glass clipping recycling program, and in 2008, the Sox became the first team in league history to install solar thermal panels at their park. Located on the roof directly behind home plate, the array provides the park with almost 40% of its hot water.

As of 2014, the aforementioned “evil empire” (I’m only half kidding) can be proud of the fact that their stadium is 100% wind farm powered, and uses high efficiency lighting, cutting electricity costs by 50%. They also donate unsold food to local food shelves and shelters after every home game. Not sure why ALL venues, across all channels of sports and entertainment don’t already do this….seems like a no-brainer. 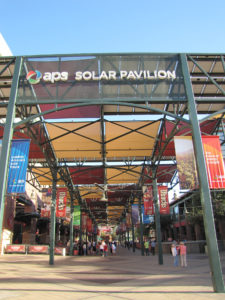 During the 2010/2011 off-season, the roof received a re-coating with Energy-Star certified materials, improving its reflectivity and thermal emittance ratings. The D-backs organization also partnered with the Maricopa County Stadium District in 2011 to construct the APS Solar Pavilion, providing shade to over 17,000 square feet over the Chase Field plaza. The solar shade not only provides additional shade to a super hot, sun-beaten area, it also generates 100,000 kWh of solar energy – enough to run the stadium lighting for 11 home games. 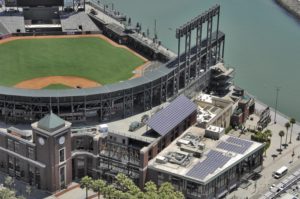 A whopping 590 solar panels were installed at AT&T Park, providing 120 kW of power, enough to power the scoreboard (or 40 homes).  In 2010, the park was the first of its kind to receive LEED Silver Certification for Existing Buildings. On top of that, the club has initiated an extremely aggressive composting and recycling program, installed low-flush toilets, and launched a re-commissioning of the park’s mechanical system.

By 2009, the team had reduced the stadium’s natural gas consumption by 66%, electricity consumption by 30%, and water use by 15%, resulting in saving the equivalent of 5.1 million pounds of C02 – equal to planting 703 acres of trees. In terms of solar, the 32.76 kW array produces 40,000 kWh per year, reducing the need for conventional electricity by up to 30%. 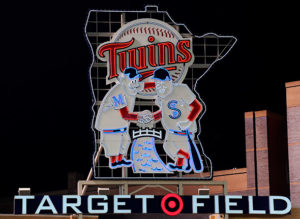 Target Field was the second LEED Silver Certified ballpark in the country, and their solar-reflective roof helps reduce both the amount of heat the stadium absorbs, as well as the energy the stadium needs to use.  Their recycling and composting programs have reduced the amount of waste added to landfills by almost 4000 tons since 2001. The club also donated more than 10 tons of food to charities during their 2014 season.

The alliance between the NRDC and MLB has also resulted in environmentally intelligent events held throughout All-Star Week and the World Series. The partnership ensures that environmental best practices for stadiums and teams are followed, all while creating a more conscious league, and ultimately, a more conscious fan base.

Since the 2005 MLB partnership was formed, ALL Commissioners of professional sports leagues in the country have also made commitments to incorporating renewable and sustainable measures into their day-to-day operations.

It’s because of all this, that as of today:

As the NDRC itself says, “No commerce or culture is possible without clean air and water; fertile topsoil; a chemically stable atmosphere; raw materials for food, energy and medicine; or the natural processing of waste by the millions of species inhabiting our soil, water and air.”

You can learn more by visiting the NRDC website .

And don’t forget to sign up to receive our monthly eNewsletter for the latest industry and EcoFasten news, updates and more!