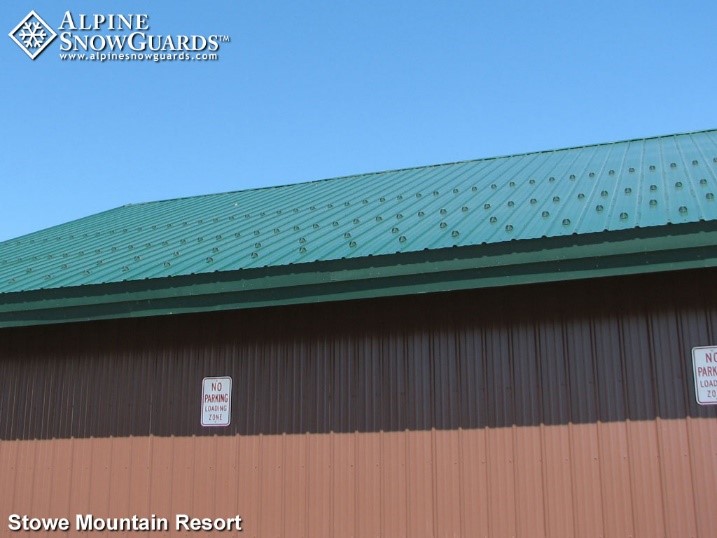 Asking if a snow retention device will retain all snow and ice on a rooftop is a very important question. It is also a very important answer to understand. Before I answer, I’d like to ask a similar question “Will a dam hold back all of the water that could accumulate behind it?”

On the surface, the simple answer to both questions is no. However, the answer is far from simple!. A basic definition of a roof top snow device could be: “A device installed on a roof top or building facade with the intended purpose of managing the flow of snow and ice as it migrates off the roof.” Hold this thought for a moment and consider Webster’s definition of a dam. “A barrier preventing the flow of water or of loose solid materials (such as soil or snow) a beaver dam or an ice dam especially. Especially, civil engineering: a barrier built across a watercourse for impounding water.” 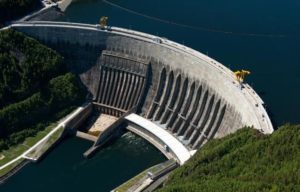 The intended purpose behind snow retention devices and dams are similar. It is an attempt to manage the movement of water, snow, and ice beyond a given point. Typically, man-made dams have flow gates to manage the water levels behind them. Similar to snow retention devices, the objective is to allow water to drain around, or through the snow guards without letting the mass of snow release all at once.

Question: “Can a snow guard manufacturer guarantee that their device will retain all snow and ice on a roof top?”

Answer: Snow guards are designed to manage the release of snow and ice from a roof top as the mass melts, or in some cases, crests and slowly drops off the roof. Consider these four variables.

Let’s look at how snow guard height, frequency and style affect performance. And, lastly, how roof type factors in, too.

1. Height of the Snow Retention Device

The first variable to observe is the height of device or dam. For example, if water exceeds the height of a dam, it simply flows over. This doesn’t necessarily equate to snow retention all of the time. Snow is sometimes more liquid than solid; meaning the density changes with time and temperature.

In a perfect scenario snow would accumulate in a light powdery form, settle, and melt slowly at a temperature around 32 degrees. This process would happen overtime and allow flowing water to run out under the snow retention device, similar to the same way the overflow gates manage the level of water behind a dam. However, Mother Nature rarely provides perfect scenarios. 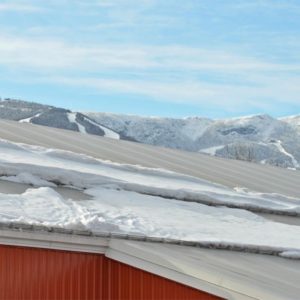 I remember as a young kid in the 1970’s, winters in Vermont where snow would start falling in November, and stay throughout the winter into late March, early April. Snow retention devices that had been installed correctly functioned perfectly during those winters. As snow accumulated, temperatures for the most part stayed below freezing. As spring approached temperatures slowly came up and the mass of snow gradually diminished.

I also remember the winter of 2018-19, when there was little snow across the Midwest until April. Suddenly, all at once, a storm brought in up to 18” of wet heavy snow, that was followed by warming temperatures transitioning the heavy blizzard into a hard rain. It is difficult for a “pad style” snow guard to retain this volume and density of snow given the naturally occurring variable.

Picture a beaver dam or snow retention system that has a frozen mass retained behind it. As temperatures slowly start to rise above freezing, water begins to flow. Over the course of time, the snow mass melts, the water trickles out, Spring blossoms, and all is well. Now picture the same situation with a frozen accumulation of snow and ice. However, in this scenario the temperatures skyrocket to 50 degrees bringing along two inches of rain fall; all of a sudden water levels are on the rise.

In the case of the beaver dam, water, snow, and some ice flows over the dam. Quite possibly the dam will be damaged in the process (Does height matter? Yes, it does). With luck, the beaver has its place of hibernation built high enough that the water level doesn’t reach him. In the case of the snow retention device the wet slushy mass is going to slump against the snow retention device.

If the device is tall enough to manage the volume of the snowy mass, all is well. If it is not the mass may crest, like a wave washing up against the shore, cascading over the top of the guards. As a generic rule of thumb, strictly for visual purposes, it has been observed that the guards will manage snow depths up to two times the height of the guard. For example, an Alpine Fusion-Guard is three inches tall, therefore, it should handle snow depths up to six inches.

For the second variable, we need to look at the frequency of snow retention devices. Using the beaver analogy: if a beaver builds a dam at the low end of a valley formed by two 5000’ mountain chains, it’s easy to understand that in a 2’ deluge of water atop a snow mass, it will likely to wake up somewhere down stream. However, if the beaver starts at the top of the valley, building dams to manage the water that is likely to accumulate, then he is able to manage the water in smaller masses. The beaver is now more likely to survive extreme weather conditions. Then he and his offspring could migrate down the valley to build a series of dams at intervals designed to handle the flow of water at its highest levels.

The same principle is true with snow retention devices. If the given snow mass or the potential volume dictated by local building codes cannot be managed by one tier of guards, it is possible to divide up the roof area into smaller sections by installing multiple tiers of guards. Simply stated, a snow retention device (this varies by product) will manage a finite amount of roof area dictated by strength of the given device, roof area to be managed, roof pitch, and area snow loads.

3. Type or Style of Snow Guard/Obstruction

As soon as the rocks began to move into place the flow of water was disrupted. Water still flowed around them, but generally slower and more managed. As more rocks were moved into place, the depth of the water would increase, and the flow of the water behind the rocks would slow. This is how our “pad style” snow guards work; they help to manage the flow of snow and ice as it exits a roof. The snow will still move around the pads (similar to the rocks in the stream) as it exits unobstructed areas. A good example of this approach can be seen as “Wing dams” (see image at left) on rivers like the Mississippi and the Columbia. 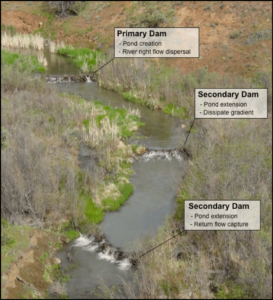 For this reason, I describe “pad style” snow guards as snow management devices. The more obstructions (pads) used the more robust and effective the management system will be. That being said, pads are not a barricade. Pad-style snow guards are added obstructions that help manage a moving mass, but by physical design cannot stop a slumping snow or ice mass from eventually migrating around them. The rate at which this migration happens depends on a variety of things that might include the roof pitch, the amount and weight of snow mass, the density of the snow mass, the roof type, etc.

If you are considering using a “pad style” snow retention device, most common in residential construction due primarily to aesthetic concerns, the size matters. As compared to rocks in a stream, a bigger rock will disrupt the volume of water greater than a smaller rock will.

An example of this might be to picture water flowing over a spill way that is 6” tall. Any device installed with the intention of obstructing the flow of the water coming through the spill way would need to be purposefully taller than the spill way it self. The taller and wider the device, the more effective it will be.

How These Variables Relate to Retaining Snow & Ice 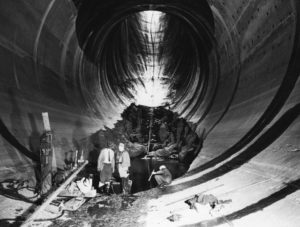 Using the river flow management as an analogy: I have tried to provide a common visual image to help the reader understand why it is not practical to guarantee how a snow guard device will function given multiple variables including “Acts of God (Mother Nature)”. What I haven’t touched on is the expectation of the consumer. 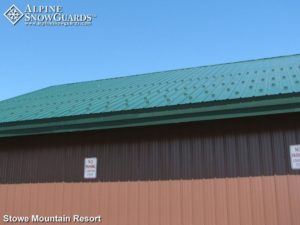 No residential project that I can recall has opted for pipe-style snow guards. Why? Building owners want the protection of a snow retention system but they don’t want to see it. It’s that simple. Building owners want guarantees, but they also want to see aesthetically pleasing river rocks scattered about in a less obtrusive manner. Remember the description above about damming a river with rocks? The more rocks you use and the bigger they are, the better they will perform. Yet all the while water / snow is still going to slip past the obstruction.

If you are looking for a reliable snow retention solution for your project, choose a “pipe-style” solution. If your intention is not to barricade the snow, but to gradually mange the amount of snow exiting the roof, the “pad style” guards are more of what you are searching for. Using only two rows of pads on most projects will sometimes cause more damage than they resolve.

There is hope! Next we’ll update you on Alpine SnowGuards’ Fusion-Guard, the ultimate hybrid snow guard, and Snow Bird. These hybrid approaches combine the benefits of both snow retention systems: the aesthetics of pads with the functionality of pipe systems. This allows for flexibility in the installation process.

When I think about engineering feats such as “The Hoover Dam”, it seems unfathomable. The time and energy that must have been required to plan, design, and implement the construction of such a monumental dam. But could a dam fail? Absolutely! No matter how much planning goes into a project, a variety of problems could evolve.