Way back in 1873 there was widespread global concern that the Earth’s population would soon consume all known resources of coal, and so experimentation with solar power began, continuing until the onset of WWI.  Flash forward 141 years to 2014, the infancy stages of what has been called “the solar century”, and solar power can be found far and wide.

With so many of us going solar these days, and with so many fascinating solar applications in the past 5 years alone, I thought it would be interesting (and fun!) to take a brief look at some of the amazing arrays around the world.  So fasten your seatbelts and get ready for the ride.

Kaohsiung was built to coincide with the 2009 World Games, which it hosted in July of that year.  Now used mainly for soccer matches, the stadium’s roof has 8,844 installed solar panels and can generate 1.14GWh of electricity per year.  Donning 3,300 lights and 2 Jumbotrons powered 100% by solar energy, the stadium was designed by Japanese architect Toyo Ito and holds 55,000 spectators. 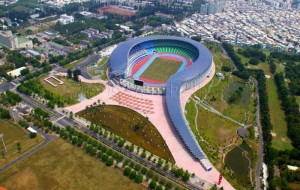 France’s largest-ever solar power station has an installed capacity of 115MW, with an annual output of around 60GWh – enough energy to sufficiently provide electricity to 55,000 people.  The park boasts 1.5 million PV modules which were manufactured by Tempe, Arizona based First Solar, and is spread across 910 acres on the former Toul-Rosières airbase.

Another Solar Park in France is being included in this post not based on size or number of PV modules (Les Mees is smaller than Toul-Rosières, covering only 36 acres and supplying electricity to roughly 8,000 families).  Built by Belgian firm Enfinity, the reason this park is so extraordinary is two-fold:  1) The breathtaking view the park offers as it sweeps over the plateau of Les Mees, and 2) The park was installed in rows that were intentionally designed to allow for the continued grazing of sheep!  I love that! 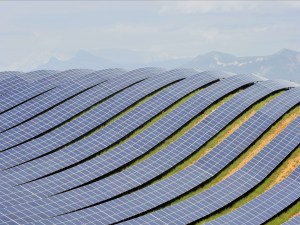 Brought about because of the tragic 2011 earthquake, tsunami and eventual nuclear meltdown of Japan’s Fukushima nuclear power plant, the Kagoshima Nanatsujima Mega Solar Power Plant came online in November of 2013.  The 70MW power plant was constructed by Kyocera Solar Corporation, and supplies enough electricity to power 22,000 homes.  With commanding views of Kagoshima Bay and active volcano Sakurajima, which last erupted in 1914, the power plant is also part tourist attraction.  Some of the facility’s features include an observation deck, a science exhibit and a circular viewing space.  Now noted as Japan’s largest utility-scale solar power plant, Kagoshima Nanatsujima utilizes 290,000 arranged panels. 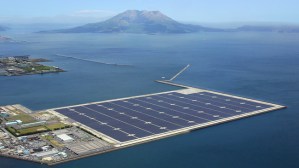 OK, so we’ve visited the shores of Japan, the mountains of France and the landscape of Taiwan….now it’s time to bring it home.

Manhattan is quite literally bursting at the seams with skyscrapers, with one of them standing out above all the rest.  The American Headquarters of Deutsche Bank on Wall Street has a solar array on their roof that is not only Manhattan’s largest; it is also the tallest flat-panel solar array in the entire world!  Rising 50 stories, almost 740 feet above the asphalt, the goal of the 2012-installed towering array is to reduce the bank’s CO2 emissions from the skyscraper by 100 metric tons on a yearly basis. 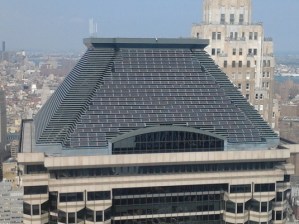 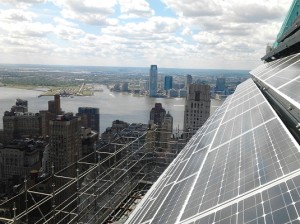 To see solar arrays these days, in most cases all you need to do is drive down the road a few miles.  The US has come a long way in focusing our energies on renewables, and it is wonderful to see that same focus in far reaches of the globe.  Like I always say, solar just makes sense, at home and globally.