It’s only February, I know, but I bet I’m not the only one who’s already dreaming of summer and the warmer, longer days ahead. I mean, honestly, aren’t you?

When I think of warmer, longer days, my thoughts automatically shift to travelling, and when I think about travelling, I can’t help but think of travelling around the world, and then my thoughts go to all the solar arrays I’d be able to see (if only I could really take the summer off and travel the world! Can you even imagine? Ahhh….)

Since most of us can’t take an entire summer off, I thought it would be fun to take a sort of “virtual” trip. Pack your bags, people! We’re going on a solar sabbatical!

Did you know that many of the world’s most distinguished, renowned, iconic, even historical buildings have gone solar? Makes me feel sort of vacation-y just writing about them! 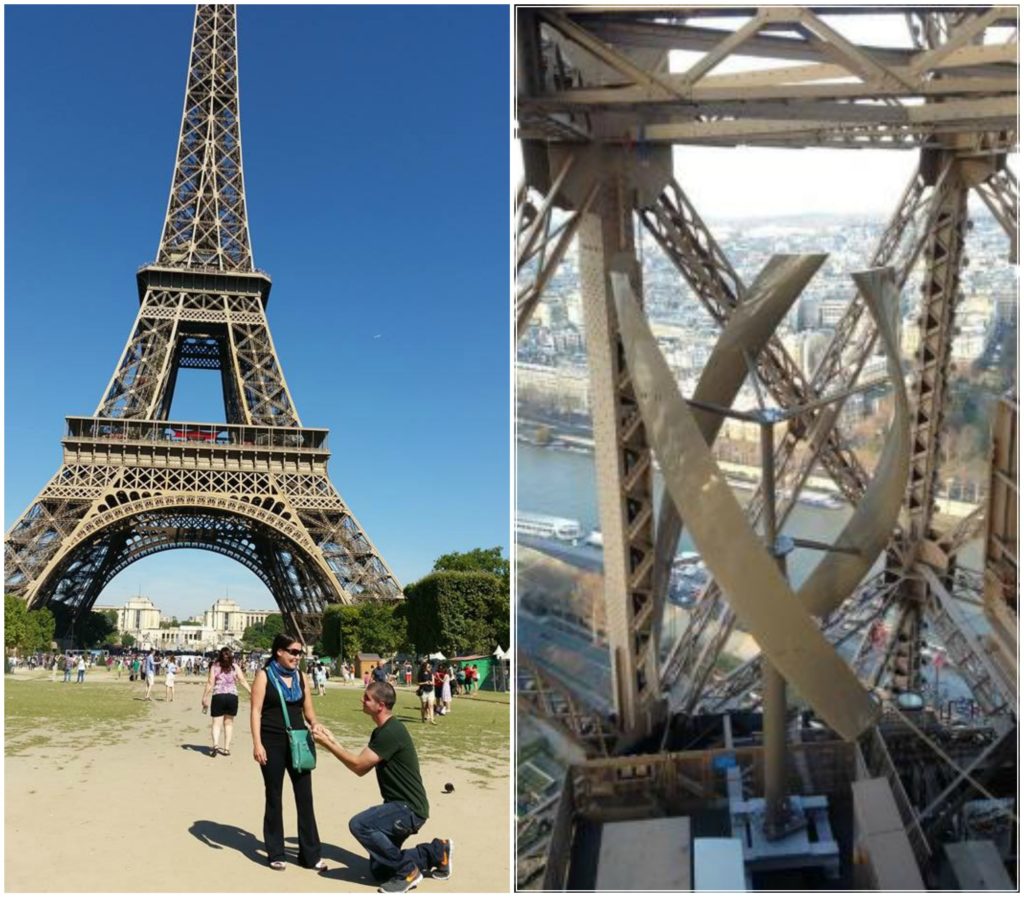 (Image on right from UPI)

My soon to be Nephew-in-law, Ben proposed to my niece, Aubrey at the Eiffel Tower last summer (that’s them on the left!)

Imagine the landmark using solar panels, wind turbines, and rainwater collectors. Imagine no longer, it’s already happening! The two VisionAIR5 turbines were installed by Urban Green Energy (Twitter handle UGE_Intl) out of New York City. They’re super quiet, take up a small footprint, and are the same color as the tower itself. The two turbines will offset the annual consumption of the first floor’s activities.

The 4 solar modules on the roof of a renovated building at the tower will meet 50% of the hot water needs, and the rainwater collectors aid in flushing the toilets within the structure. 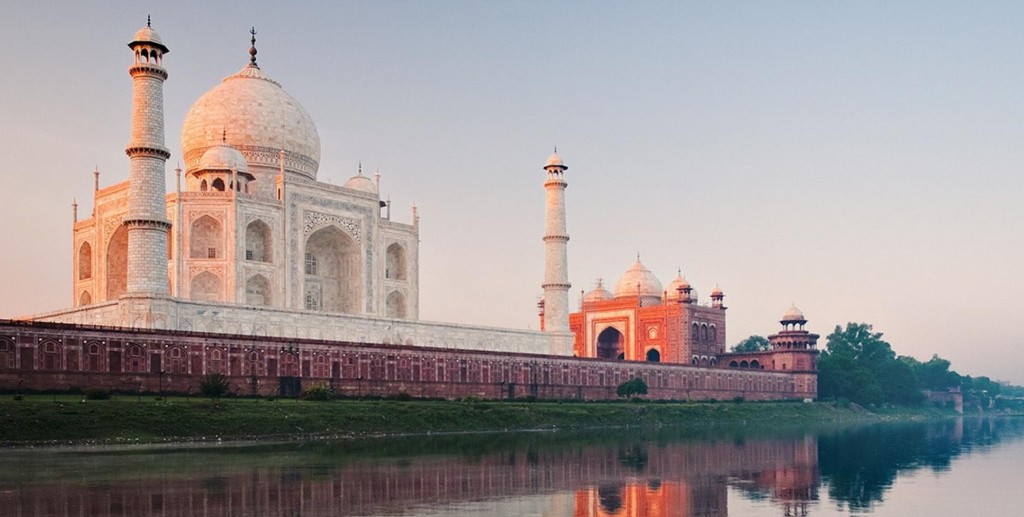 Picture this: What was once a mausoleum built during the 17th century now uses energy from a solar power plant located nearby. That’s exactly the case for the Taj Mahal. The plan didn’t come about by wanting to go green, or even to save money. The plan came about to help save the Taj Mahal from the continued effects of air pollution. 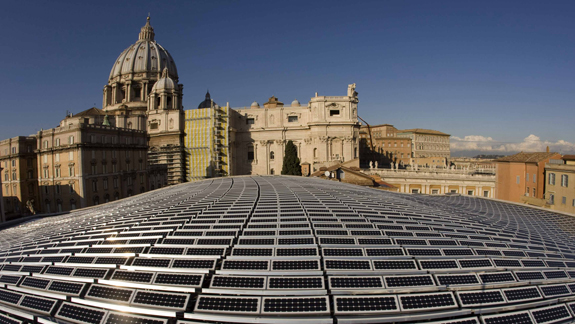 In 2009, Pope Benedict XV1 had over 1,000 solar modules installed on Audience Hall at the Vatican, and his predecessor, Pope Francis, issued a “letter on the environment” last summer prior to the Paris climate talks.

The current Pontiff has been known for such memorable “green” statements as, “God is not a divine being or a magician, but the Creator who brought everything to life. Evolution in nature is not consistent with the notion of creation, because evolution requires the creation of beings that evolve.” 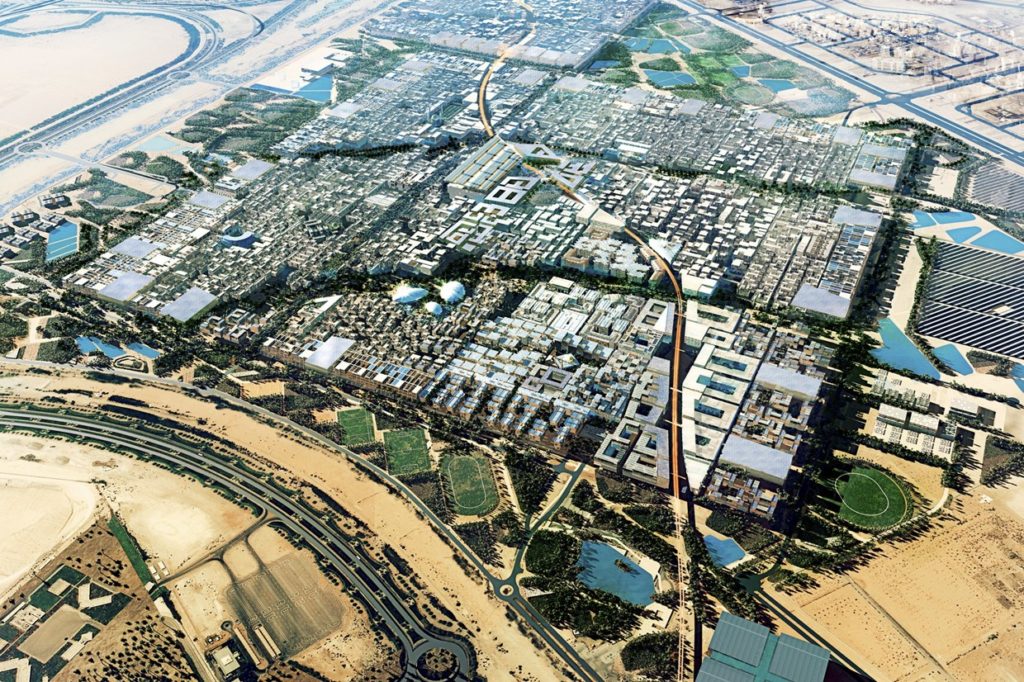 OK, so it’s not a single structure, it’s an entire city, and I may be dating myself a bit here, but when I think of Abu Dhabi, I automatically think of Saturday mornings growing up, with only 3 TV channels to choose from, and watching Garfield cartoons – Abu Dhabi is the destination Garfield always marked the box that contained Nermal, the jealousy-provoking kitten that Jon dubbed, “the world’s cutest kitten”.

It turns out Nermal never made it to Abu Dhabi, but a utopia in the middle of the desert, Masdar City, did. It’s an urban experiment on the grandest scale: the “world’s most sustainable city”, with the fist portion of the project being the Masdar City Solar PV Plant,  the UAE’s first grid connected system. With nearly 88,000 modules, the 10MWp system produces 17,500 MWh per year!

(Images from Go-Green and BlueTech)

A short 2 hour drive to the north of Abu Dhabi, and you enter Dubai – the location of the spectacular, almost eyesore of a structure known as Burj Khalifa. The tallest building in the world (since 2008) is also home to 378 PV solar collection modules, all located on the roof of the buildings office annex. The collectors can heat 140,000 liters of water in just 7 daylight hours! 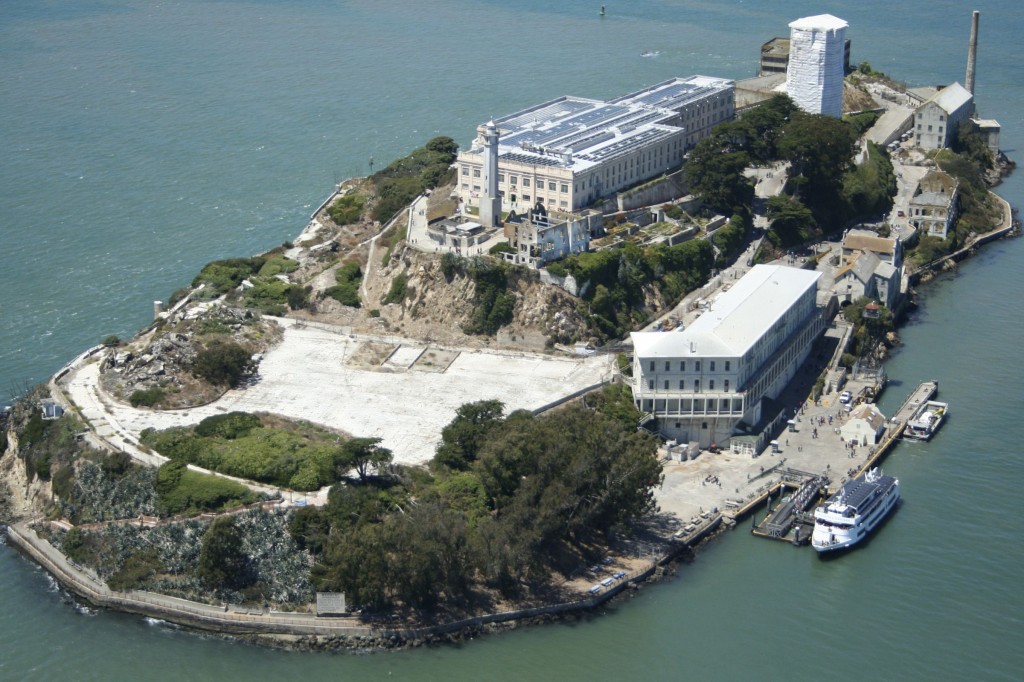 “The Rock”, which began its history as a military prison, then a maximum security prison (for 29 years), and now a tourist destination, lies just 1.5 miles from the shores of San Francisco.

In 2013 alone, over 31,000 gallons of fuel were offset by the production output of the 1,360 PV modules installed on Alcatraz. So, what about the ferries that are still needed, for those things mentioned above, as well as to transport visitors to the island? The majority are now hybrid, running off solar and diesel power. 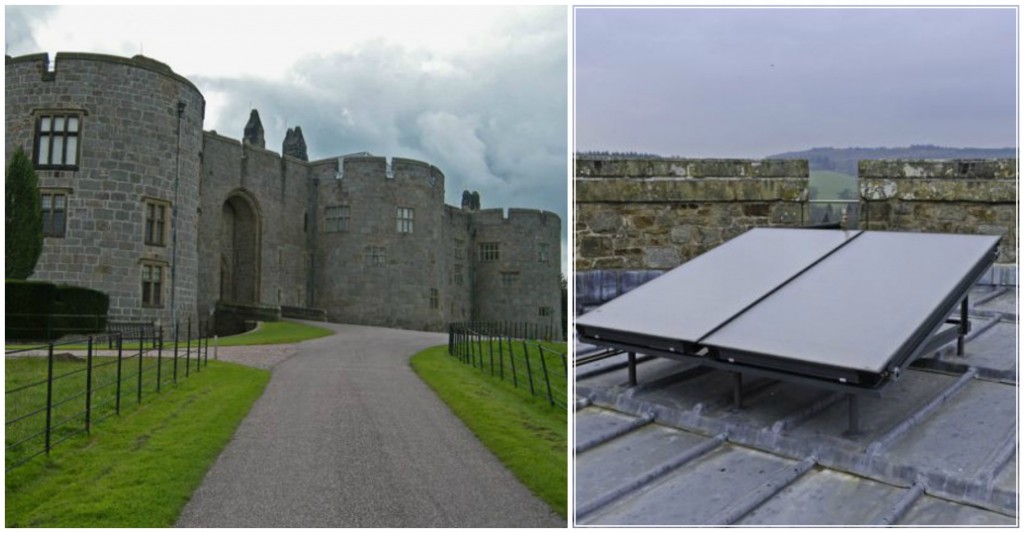 This one is by far my favorite. Picture a 721 year old castle that was built as part of King Edward I’s chain of fortresses across Northern Wales. Complete with a dungeon, turrets, and a medieval tower, Chirk Castle first went green when a solar thermal system was added in 2009, which is used to supply the castle with hot water during the summer months. They system reduces the castles carbon footprint by over 4,000 kg of CO2 annually. 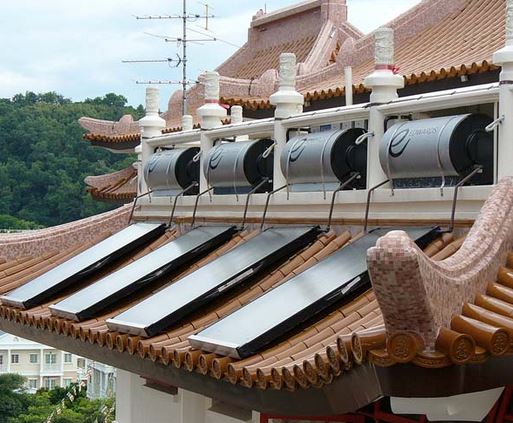 On a small hilltop on the Southern coast of Singapore lies Poh Ern Shih (translation: Temple of Thanksgiving). In 1942, villagers and their Japanese soldier allies were killed here during the Battle of Pasir Panjang. Flash forward 61 years, to 2003 when Poh Ern Shih became the first religious building in the country to start using renewable technologies.

The combination of traditional design and green upgrades are very impressive, and work cohesively thanks to the architecture teams who worked on the temple. The rooftop is adorned with modules for hot water heating and lighting of the temple. Rainwater collectors and wind turbines have also been added – a smart move in this windy location.

With so many famous, historical, and interesting buildings and places around the world that have gone green, it’s hard to decide where we should travel to next….

Follow us and feel free to share & tag us in your installation images. And don’t forget to sign up to receive the latest industry and EcoFasten news, updates, events, and more!