The 1960’s. It sure was an interesting era for Americans. The era was dominated by Civil Rights protests, the Vietnam War, social unrest, the assassination of President Kennedy, peace, love and rock & roll.

In the construction industry, from about the time of the depression up until this point, hard roofing and the recognized need for snow guards had been on the decline. There were undoubtedly snow guard manufacturers, products and designs remaining from pre-WWII times, and it’s safe to say that those manufacturers who still made snow guards treated them as special additions to their “main” product line.

An interesting need began to evolve during this time period that would initiate a gradual jump-start in the snow guard industry. Copper, typically 16 oz. copper, was the most common flashing material used on hard roof installations in the late 1800’s. We now know that 16 oz. copper has a life expectancy of about 70 years. As the flashing deteriorated and roofs began to leak, a need for significant roof repairs began to materialize – not your typical routine maintenance of broken shingles, but full-on flashing replacement, shingle repair, and yes, replacement of missing, damaged or deteriorated snow guards.

So, think about this…a roofing contractor is called to fix leaks on a slate or tile roof. In many cases, that same contractor had also been providing routine maintenance for years. The determination is made that the leaks are not due to missing shingles, but instead are due to a need to repair all flashings, or simply replace the roof. When carried out by qualified and experienced technicians, a repair seemed like the most cost-effective fix. This is where things really start to get messy…

By now, the qualified and experienced technicians have almost all already retired. The “tribal knowledge” passed from one generation to the next now sees a void of about 30 years. All of the practices from the pre-depression era were now starting to show signs of needing to be resurrected…but by who? How did a contractor go about matching shingle sizes, colors, thicknesses, proper fasteners, better flashings with proper soldering, snow guards, etc.? I have to imagine that finding the proper materials in this era was difficult, at best. Once found, the cost was the remaining factor since “specialty roofing products” have always been more expensive. 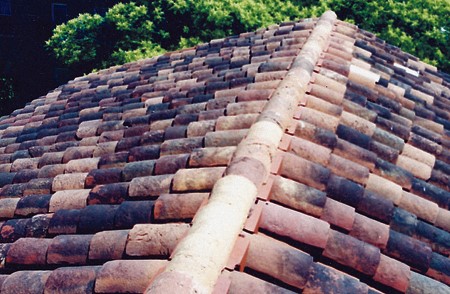 In some cases, much-needed items were not available. In other cases, they were available but were ridiculously high-priced. What better opportunity than this to create something new and more cost-effective, right? 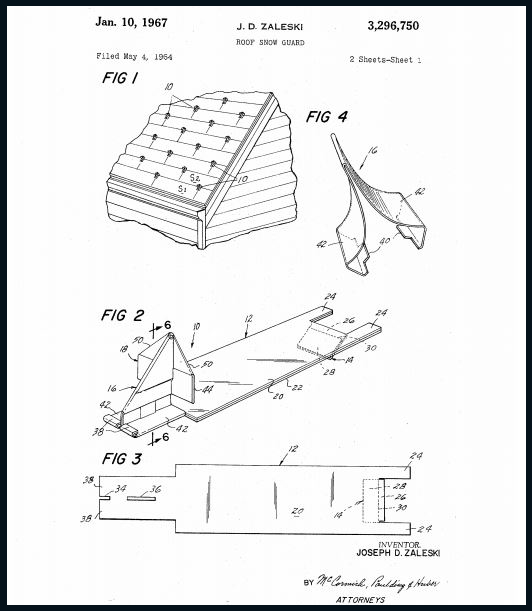 The patent was applied for in 1964 and was awarded in 1967. This product is still available on the market today, so I took some time to visit the website. A couple of things jump out that are humorous to those of us with a sense of humor.

First, the company claims it’s been in the snow guard business since 1950. However, the patent was filed in 1964. Typo? Maybe. Or maybe they were really roofers prior to 1964 and participated in snow guard repair or replacement?

Second (this is one of my biggest pet peeves), they state boldly “pipe-style snow guards don’t work”. Humorous? Not really.

Laughable? Again, maybe, but I look at it from a different angle. It’s simply a misguided statement due to lack of product function and company experience.

I’ve said it many times, and so in all fairness, I will say it again here: Every snow guard device I’ve seen will work properly when used on the appropriate roof, in the appropriate climate and installed in the appropriate quantities (with the exception of adhesive-mounted devices that will absolutely fail as the adhesive stretches and/or is broken down by UV light).

Yes, the product in the above-mentioned patent does have a place and it will work well when used properly. The problem is that when used properly, it’s a very expensive system, it only looks aesthetically correct on shingles that don’t exceed 1/4” in thickness, and sadly, when loaded transversely (as in a valley scenario), they twist and lay down on their sides, often breaking adjacent shingles. Yes, they have a place. Yes, they work, but they were more appropriate in the pre-1970’s era when shingles (slate and synthetic slate primarily) fit all of the above criteria.

To be completely clear, I have not seen a mechanically attached snow retention device that would not work if installed correctly and used appropriately. Statements declaring that one style or other doesn’t work are misleading, and are a direct reflection of inexperience by those who make such statements.

Alpine SnowGuards makes over 60 models of standard snow guard configurations to meet varying roof type and geographic needs. In addition, Alpine commonly makes custom snow guard designs to match historic elements or special needs. As an example, below are some of the custom designs we’ve worked on in the past.

Stay tuned …. things are about to get REALLY interesting as we move into the 1970’s!